UKIP deciding to ban the Burqa seems like an ugly political move, calculated to grab attention, and pitch for votes from those less highly thought of, in the political ‘C’ hierarchy.

My first reaction was to say ‘oh no’ like Iain Dale, and wonder if Farage was becoming a little too much of the bully boy, with this coming on top of drumming Nikki Sinclaire MEP out of the EP delegation on what appeared to be a pretext.

Is he, and are UKIP getting a little desperate, seizing on opportunistic cultural issues to boost their flagging poll ratings, as FPTP edges them out of voters’ sights? Is NF in danger of becoming, in a phrase, no more than a potential ‘ Beast Of Buckingham’, throwing his weight around a little too often?

To decide, you have to listen to his case, as in the above interview clip.

Farage is at his best debating a point. In some ways he reminds me of Ken Clarke. Never lost for words, he keeps up pace and bounces back instantly from opponents’ and interviewers’ jabs.

As for the burqa issue, Farage has always been against a multicultural society, all along. I remember him telling me so much nine years ago, when I had used the word in a leaflet he had asked me to write, and he wanted it corrected. This policy is consistent with his beliefs. As he is talking with personal conviction in the above clip, he convinces.

This, to my mind, is not electoral window dressing, as many are seeing it to be, but from the heart, Farage at his best.

The problem for UKIP is that the EU is not going to feature as an issue in this election. There is no Treaty up and coming to build fears over. The Euro is still decades away, and to most people, the EU is still a low priority issue. Raising a cultural issue, such as the Burqa is, for UKIP, a sensible way to keep the political pot boiling. The good people of Buckingham Constituency will no doubt be taking note.

If Farage is elected by them, he could yet earn the title that previously headed this post (The Beast of Buckingham), gaining a reputation in The Commons for sinking his verbal teeth into those he sees as pusillanimous, dishonest and wrong, with UKIP youtubing his performances.

Buckingham, It’s your call. Is it a political beast with strong claws you’d be wanting? Or the charming chancer that you have today, whose views seem fluid and variable to suit the occasion? 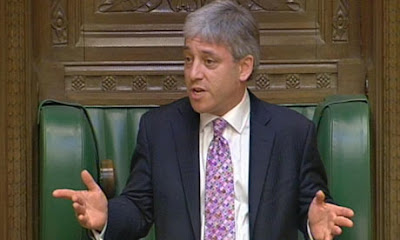 For Conservatives wondering what use UKIP are, were Farage to be sitting in the Commons, there is this thought. All talk of PR by Labour and Lib Dem has been halted since UKIP came 2nd in the EP elections. Farage would be a good reminder to all and sundry that the Conservatives with UKIP would be the natural majority under PR. That alone, to my mind, will be seen as Farage’s greatest achievement. That PR in Britain just ain’t gonna happen. He deserves credit for that.

But Farage in turn should remember that the only way out of the EU is through ‘persuading’ the Conservative Party to find the exit. For that purpose, Bercow is useless. He promised a referendum on Lisbon, but then voted against it. That’s bad, John. Not a good move, and it’s brought Farage to your door.

REMEMBER – I wrote just days before Farage Must Make More Impact. It looks like he took that advice seriously!

4 Responses to “The Beast Of Buckingham”