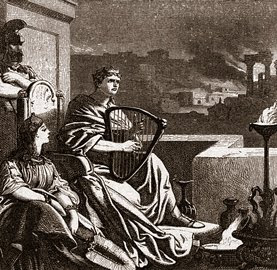 This morning’s report from Open Europe conjured up an image in my mind of Emperor Nero fiddling while Rome burned. The Eurozone is fast heading into fiscal crisis, first Greece, but soon too Portugal and Spain. The news get worse by the day as nothing is being done to address the real problem. Read the report below and see how ‘in a few weeks’ the EU will be getting around to doing something. That something being? Changing the accounting procedures!!!!

The WSJ reports that Portugal’s report of an unexpectedly large 2009 budget deficit has reminded investors that Greece isn’t the only eurozone country with fiscal problems. BNP Paribas Analyst Ian Stannard is quoted saying, “Everyone has been focusing on Greece, but now they are waking up to the fact that it’s not just Greece.”

The Irish Independent reports that New York University Professor Nouriel Roubini said yesterday at the World Economic Forum’s annual meeting in Davos that Spain poses a looming and serious threat to the future of the eurozone. He said, “If Greece goes under, that’s a problem for the eurozone. If Spain goes under, it’s a disaster.”

Meanwhile, the FT reports that the European Commission is drafting a legislative proposal, likely to be unveiled in the next few weeks, which would allow the EU’s statistical office, Eurostat, the power to audit national governments’ accounts.

This is a classic. How wretchedly useless a response is that! They can sign as many Treaties as they like, but if they can’t handle money responsibly, the primary role of any government, they should be got rid of. As for Gordon Brown, same goes for the EU. They can take their fiddles with them, and make way for a return to responsible government.

The coming crash in the eurozone will reverberate around the world. The Lehmans/sub-prime disaster will be a minor event in comparison to this one. Keep a bit of cash handy in US$. And have a few sips of your favourite tipple, or a look at your favourite pin-ups. It’s only money after all.

Greek bond yields surged higher again, adding to Wednesday’s spike. The yield on 10-year debt broke through 7 per cent at one stage as worries about Athens’ fiscal situation endured. This pushed the spread between Greek bonds and German Bunds to a new record of more than 390 basis points. The cost of Greek 5-year credit default swaps – a gauge of insurance against debt default – rose to a record of 395 basis points.

The spread between Portuguese and Spanish bonds and their German counterparts also widened sharply, as investors targeted other eurozone members who they believed may struggle to service their debts. The CDS of Portugal rose almost 4 basis points to hit a record high of 153.4, according to Reuters.

Yields on UK 10-year gilts jumped 6 basis points to 3.93 after the S&P comments hit the wires. “Markets didn’t react to the original report (that Britain’s banks are no longer considered AAA), so maybe they still need to smell the coffee.”