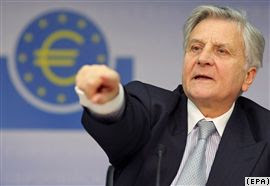 The Euro’s first casualty is reporting in. The losses are so big in Greece, ánd the collapse of fiscal discipline so great that I don’t think the ECB, the Germans or anyone else connected to this catastrophe, can yet see clearly that the Euro game is up.

Greece’s national debt will be 120pc of GDP this year. S&P says it will reach 138pc by 2012. A fiscal squeeze – without any offsetting monetary or exchange stimulus – will cause tax revenues to collapse. Debt will rise higher on a shrinking economic base.
Even if Greece can cut wages without setting off mass protest, it lacks the open economy and export sector that may yet save Ireland in similar circumstances. Greece is caught in a textbook deflation trap.
Labour minister Andreas Loverdos says unemployment would reach a million this year – or 22pc, equal to 30m in the US.

The EU are trying to imagine rescuing Greece from this mess, but how can they? If they do the catastrophe will only be deferred and the losses be bigger.

Reality is at last arriving into the midst of the Euro, and the One World Government dream, which has fed itself on a 16 year long economic boom, in turn fed by debt on a scale the world has never before experienced. The party’s been so heady, and the rush of power to the centre so beautifully gratifying for the naive fools who claw more and more of it to their breasts, that they are simply unable to face up to the reality of the monster they have created.

The Euro is finished. OK. That’s what this means. But how long will it be before anyone in the EU will even be able to think that, let alone say it? Trichet, head of the ECB? He’d rather lie down and die.

One Response to “EU Gulps At Greek Economic Catastrophe”