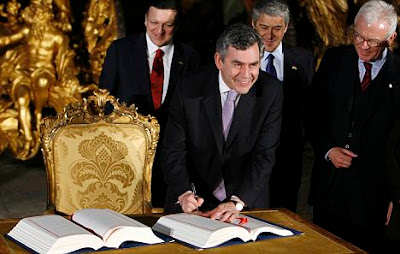 This is the most incredible news I have yet heard about the Lisbon Treaty. Article 122 – did you read this one Mr Brown? – states that where a member state is in severe difficulties, the Council Of Ministers may grant Union financial assistance, and no country can veto the decision if they do. Greece is about to crash out of the Euro, unable or unwilling to fix its deficit. A Union bail-out is being planned as the only way to stop the Euro from disintegrating.

According to Open Europe, Britain will be required to contribute. Even though we are not in the eurozone we signed all the terms of the Lisbon Treaty. Open Europe today says that Britain’s share of the Greek bail-out will be £7 billion, or higher if other bankrupt eurozone countries like Spain are excused their share, maybe £8 or £9 billion.

Can you believe it? We in the UK are already borrowing to the tune of (minimum) £178 billion this year, of which £10 billion is going down the throats of EU bureaucracy, and now this.

Did anyone have any idea that dear Old Gordon was signing us up to bailing out the EU’s bankrupt states such as Spain, Portugal, Italy, Greece and Ireland when he dashed off to sign up to Lisbon first thing he was appointed, when he refused to be photographed signing the wretched thing?

If Greece, which is only 3% of EU GDP is bailed out, so will the others ensure that their taxpayers are not required to endure a harsh regime, and plead for similar treatment. The other PIGS, Portugal, Italy, (Greece) and Spain are heading the same way as Greece. The total of these countries makes up 20% of EU GDP. If the bail-out is pro rata Britain’s share will be no less than £50 billion.

Britain’s own finances are in just as sorry a state as the PIGS, courtesy of dear old Gordon with our deficit possibly as high as 25% of GDP. The banks still have potential toxic assets in the trillions and yet we are being asked to stand the hit for these basket case economies who have never acted as responsible eurozone members, as well.

It’s very simple. We can’t. If the Euro needs to split off the degenerate economies, no problem, but as far as Britain is concerned, the EU can get its greedy hands out of our pockets. We are not going to take part in sheer lunacy and bankrupt ourselves because others feel that’s the easiest way for the Euro bureaucrats to save their faces.

As Gordon launches his ASPIRE election campaign, could he give us some idea how and why we should pick up the tab for the fiasco that the Euro is becoming. We opted out. It is not our responsibility.

And as for the Lisbon Treaty, maybe David Cameron is wrong to say it’s finished business. We were not told about these terms whereby we would have to bail out the financially rotten half of Europe. This could cost us £50 billion.

We are living in la la land. Someone has start telling it like it is. The answer to the EU is simply N followed by O. And then O followed K.

UK could face £7bn bill if the EU bails out Greece;
Anatole Kaletsky: The eurozone will be tested to “near-destruction”

The Mail on Sunday reported that if an EU rescue fund for the troubled Greek economy matched the country’s budget deficit, the UK would be asked for £7billion, assuming contributions matched each country’s share of the total EU economy. The article noted that, until now, discussion has focused on whether fellow eurozone members could be asked to bail out Greece.

But under Article 122 of the EU Treaty, all EU members could be liable. The Treaty article says: “Where a member state is in difficulties or is seriously threatened with severe difficulties caused by natural disasters or exceptional occurrences beyond its control, the council of ministers, on a proposal from the European Commission, may grant, under certain conditions, Union financial assistance.”

The paper reported that the EU Council decision would be made on a majority vote with Britain having no veto. If other troubled eurozone members such as Ireland or Spain were excused from making a contribution, Britain’s share could be even larger. A Treasury source would not comment on whether any official calculations have been made regarding Britain’s potential exposure.

In the WSJ, Erwin Stelzer writes “we are about to learn whether the euro can survive a two-speed euro zone. If France and Germany do recover at a rate that requires the ECB to tighten so as to avoid inflation, the laggards would be hard hit – higher interest rates don’t make life easier in recession-bound economies.”

He adds, “Germany, France and other countries have too big a stake in the long-run viability of their new currency to see Greece do what its politicians might feel they have to do to preserve their alliance with the public-sector trade unions – drop the euro, and re-establish their national currency, sufficiently devalued to stimulate exports and economic growth.

It is unlikely to come to that – there is so much political capital invested in the euro by the political class that even the stern and parsimonious [German Chancellor] Angela Merkel will in the end contribute to a bailout fund if necessary.”

In the Times, Anatole Kaletsky argues that “before this crisis is completely finished, the cohesion of the eurozone will be tested to near-destruction.”

According to Fraser Nelson, the Labour Party don’t really care about any of the details. They are all thinking beyond the election, what jobs they can land, who can become Leader of The Opposition. They just don’t care about the finances. In fact the worse they are the more delighted they will be to see Cameron and Osborne struggling to repair the damage.