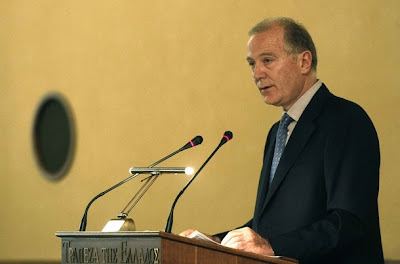 By default, the crisis can only get worse.

Open Europe gives just one day’s events surrounding the drift of the Greek Euro, and the effects it will have, or is having.

Commission denies preparing for Greek bail-out;
Deutsche Bank Chief Economist: Eurozone faces potential break down or high inflation
The WSJ reports that the financial markets are unconvinced by the Greek government’s assurances that it isn’t seeking outside help from either the EU or the IMF with its public debt. Analysts said the government is moving too slowly to address Greece’s fiscal problems and investors are showing their disbelief by selling down Greek stocks and bonds. A Commission spokeswoman denied yesterday’s reports that the EU was preparing a loan for Greece, saying she wasn’t aware of any financial bail-out packages being arranged.

In the FT, Greek Central Bank Governor George Provopoulos argues that Greece will be able to solve its economic problems from within the eurozone.

Die Welt features an interview with the Chief Economist of Deutsche Bank Thomas Mayer. When asked if he is worried about the euro, he answers “The situation is more serious than it has ever been since the introduction of the euro. The trouble in Greece plays a key role for future development.” When asked what the worst case scenario could be, he answers: “If the Greece situation is handled badly, the Euro-zone could break down, or suffer major inflation”.

He added that “Neither the European Central Bank nor the Commission nor any other EU body can force Greece to implement necessary reforms in exchange for help.”

Meanwhile, the WSJ notes that the euro has lost value and that “persistent fears about Greece’s fiscal situation have turned trade in the euro into a vote on the currency bloc’s credibility.”

Provopoulos (PICTURED) said Greece “will not be tempted” by “short-term options” such as creating its own national currency and allowing it to depreciate. Instead, it “will undertake the necessary, bold adjustments” it needs to make. “The future of its economy is unwaveringly tied to the mast provided by the euro,” he said.

He noted that in the 1980s, Greece devalued its national currency, the drachma, without engaging in necessary structural reforms. Far from being a panacea, the devaluations led to inflation and no improvement in competitiveness. “So much for the magic wand of currency devaluation,” he concluded.

It’s anyone’s guess as to how this situation will resolve. The eurozone is using threat, not carrot to encourage Greece to sort itself out. As Thomas Mayer says, no one has the power to force the Greeks to keep proper accounts. The fact is that no one in Greece even knows the true financial situation. It’s that hopeless.

That’s about the reality too. Everything’s bouncing.

LINK TO BLOOMBERG HERE, as per tipped by thedarknight in comments below, Charles Dumas from Lombard. The Euro will collapse.

2 Responses to “Deutsche Bank Chief Economist ‘Eurozone could break down’.”