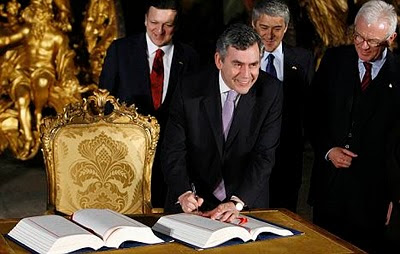 The Financial Times is complicit in a deception of its readers this morning. ‘What’s new?’ a cynical media-observer might ask? Here is an extract from the article I am referring to. Ask yourself as you read, why is Darling stating that it’s not up to Britain to bail out the Greek Euro? Surely that’s obvious.

Alistair Darling said on Friday that Britain would not join any European effort to bail out Greece but pledged not to use differences in global financial regulations to promote the City of London.

Answering questions about a possible European bail-out of Greece at the World Economic Forum in Davos, the British chancellor made it clear he saw the problem as one for the eurozone and not the wider European Union.

“The euro area has primary responsibility for anything that might be happening. We are not involved in that,” he said.

Britain’s decision to opt out of the single currency means it is not part of the eurogroup, which discusses eurozone affairs.

“It is in the interests of the eurogroup they provide whatever assistance [is required],” Mr Darling added.

In the Lisbon Treaty, which Gordon Brown rushed to Brussels to sign, and which he crashed through both Houses of Parliament as the first act of his premiership, there was one small term which Darling is getting worried about, Article 122. A majority of the Council of Ministers of the EU can decide that a financial rescue package can be put through to bail out a eurozone member.

This is how I described the situation two weeks ago –

This is the most incredible news I have yet heard about the Lisbon Treaty. Article 122 – did you read this one Mr Brown? – states that where a member state is in severe difficulties, the Council Of Ministers may grant Union financial assistance, and no country can veto the decision if they do. Greece is about to crash out of the Euro, unable or unwilling to fix its deficit. A Union bail-out is being planned as the only way to stop the Euro from disintegrating.

According to Open Europe, Britain will be required to contribute. Even though we are not in the eurozone we signed all the terms of the Lisbon Treaty. Open Europe today says that Britain’s share of the Greek bail-out will be £7 billion, or higher if other bankrupt eurozone countries like Spain are excused their share, maybe £8 or £9 billion.

Can you believe it? We in the UK are already borrowing to the tune of (minimum) £178 billion this year, of which £10 billion is going down the throats of EU bureaucracy, and now this.

Did anyone have any idea that dear Old Gordon was signing us up to bailing out the EU’s bankrupt states such as Spain, Portugal, Italy, Greece and Ireland when he dashed off to sign up to Lisbon first thing he was appointed, when he refused to be photographed signing the wretched thing?

Darling is clearly now terrified that the said Article 122 is about to be activated. He is even offering to roll over and lie down like a lamb so that Barnier, the new Financial Overseer of the EU, can ram as many of his new regulations as he likes down the throats of the City Of London, as long as the EU doesn’t try and saddle Britain with another possibly £50 billion of liabilities to save the Euro, on top of the £1 trillion Darling already has to deal with.

To the Financial Times, the worthy and reputed European newspaper of choice, the Lisbon Treaty has already ceased to exist, as it has for Alistair Darling.

I’ve got news for the Financial Times, and the Chancellor. It hasn’t.

This is the talk that has spooked Darling, coming from the EU yesterday. –

Eurozone countries and EU authorities are reluctant to spell out how they would assist Greece, for fear that it would relax pressure on Athens to attack its problems and unsettle rattled financial markets.

The immediate priority is for Athens to demonstrate that it is serious about cutting public expenditure, improving tax collection, publishing reliable financial statistics and tackling corruption, the officials said.

“Greece has to sort this out itself. That is the issue,” a French official said.

Mr Barroso said “the best way to help Greece is for Greece to respect its obligations under the stability and growth pact”, a reference to the EU’s fiscal rules.

His message was echoed by José Luis Rodríguez Zapatero, Spain’s prime minister, who said: “The euro club is a strong club with strong ties and reciprocal support. Let no one be mistaken about that.”

There seems little doubt that a rescue is going to be attempted, and that Britain will be made to take part whether Darling likes it or not. The only thing is whether the rescue will be credible and in time. If darling is refusing to take part in one, the EU will be in trouble raising enough funds.

The real story missed by the British media almost entirely is that the Lisbon Treaty could cost Britain £50 billion if we are roped into a major rescue of the PIGS. And even in the Financial Times, this simple truth will not be stated in totalitarian media-controlling Europe.

That’s why we blog. The truth will get out. We will not be enslaved with lies and propaganda. We will live as free people. We are already free in our hearts and in our minds.

9 Responses to “Darling Fears Art. 122 Of The Lisbon Treaty”