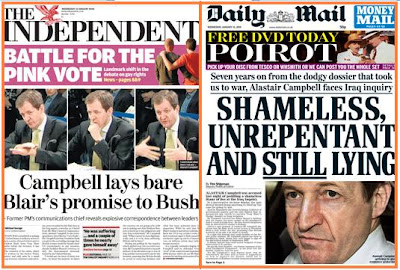 London’s winter theatre season has received a boost. Alastair Campbell is appearing in The Chilcott Enquiry into The Iraq War, playing at the QEII International Centre, giving audiences a nostalgic remembrance of the glorious Noughties, when the New Labour song and dance act was still topping the charts. Soon the greatest star of the period, Tony Blair, remember him?, will be stepping back onto the boards for just one more grand finale before he returns to his life of retirement, as a multi-billionaire living in private jets, and lecturing to rows of confused students at Yale University about how religion and warfare can be make the world a better place.

It is not only wonderful to see the old stars back on stage after so long, but they are spilling out lines that would have been unthinkable in their heyday. This for example, from Allie Campbell.

He has revealed that the current star of the show Gordon Brown was, even in 2001, well inside the loop in the war cabinet, despite the fact he has pretended all along that he wasn’t. So modest is our Gord. He was writing many of the lines even then.

Another item I noticed from Allie was that the build-up to the Iraq war was much longer than presented to the British public at the time. Was this dramatic licence, Campbell was asked. Campbell says no. He states that the war in Iraq was being discussed as early as 2001. It was on the agenda for two years before its launch, and was not a sudden knee-jerk reaction to a new Iraqi weapons capability – the WMD as we were told at the time.

The WMD was a fantasy piece, full of dramatic effect, which got audiences trembling in their seats. It was an unforgettable piece of theatre.

2001 was also a significant year in military terms. It was the year that all countries agreed to pool their military intelligence, in the move to One World Government, and of course it is the year of 9/11. However much we still believe about that show over on Broadway being entirely what we were told at the time, I am also not sure. The special effects were outrageous, and defined the era.

The Iraq war was presented as an American war with the Brits standing by their jolly old allies, and Campbell still maintains this fiction. This was not true, of course, more of the sentimental poetic licence that dream-creators are well known for. This was the first One World Government war, ordered from a level higher than that of national governments, but audiences in 2003, were not ready to be told about the new genre.

Blair was instructed to join it, as was Bush. Campbell was told to bring political support through our Parliamentary system, which he did. He is still maintaining that Blair made the decisions, along with Bush. This is cover up. Theatre. Quite brilliant. Blair was a hired hand of the OWG empire, working for the promise of big payoff, no doubt believing that such overwhelming force was unstoppable, and that the war would be a doddle. Think of the victory party he could have had, if it had gone according to plan. The cheering in the streets. The endless thanks of a grateful people.

But sadly it wasn’t to be. In that theatre, the planning was so poor that it all ended in tragedy. Sadly Blair and Campbell lied then and are still lying now about their roles.

But let’s not be surprised. The whole structure of our government is a lie, the creation of brilliant creativity and imagination by script writers and scenery professionals, both here, in the rest of the EU and in the US. The politicians we see and are presented with each day, are the retail end of the programmes, merely the actors.

The real decisions are taken higher up in the chain of command nowadays as a matter of course, not like the days before these two old rogues went and changed it all. If Campbell would come clean and reveal what he really knows about how the world works, it would be nice. We could then forgive him his former crimes. He was only a young actor playing a part he clearly didn’t really comprehend. 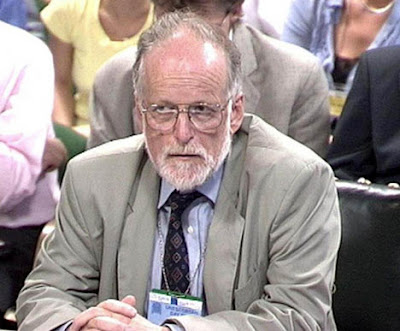 But of course he remembers what happened to David Kelly. Ever since then the telling of truth has not been in season.

Once you are in with OWG, there is never any way to ‘retire’. It is no different to the mafia. Such power concentrated in so few hands has never existed throughout history. Secret power is the greatest of all, because it is not possible even to speak against it. If Campbell was truly courageous, he would decide to open up to the Chilcott Enquiry. But fear decides how he behaves. The former actor will take his shame to the grave.

But to hear him sing just one more time, the voice that for millions defined an era, a voice once feared and tragically believed, is reward enough.

Asked for his general conclusions on Britain’s role in Iraq, Mr Campbell mounted a strong defence of the actions he and Mr Blair took, and of the fundamental decision to invade.
He said: “I think that Britain, far from beating ourselves up about this, should be really proud of the role we played in changing Iraq from what it was to what is now.
In Mr Blair, “I saw somebody of really deep conviction and integrity, who was making the most difficult decision of his premiership.”
He added: “On the big picture, on the leadership he showed, on the leadership the British government showed on this issue, I was privileged to be there and I’m very, very proud of the part that I was able to play.”

Excuse me. Where can I find One World Government?.

Secrets Of The CIA shows what game Blair was playing – typical CIA stuff.