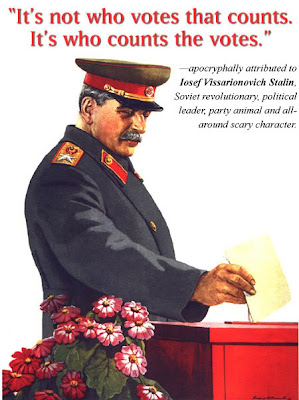 Using lack of funds to employ extra staff for the election count, as their excuse, 64 local authorities, many controlling the vote of key Conservative targets, are refusing to count their votes until the day following the vote.

There are 161 other authorities who have yet to decide how they will handle their counts.

Whatever else has been decided, there will be no chance of an Election Night results declaration. The Election will be decided the following day.

It will be interesting to see if these marginals show any difference in the pattern of their results. Britain suffers the outrage of a postal voting regime which permits harvesting of votes by political parties, described by a High Court Judge as ‘sufficient to disgrace a banana republic’. Are we to join the ranks of the Zimbabwes of this world, to boot. Will ballot boxes be free from electoral operations?

As Joe Stalin said, ‘It’s not who votes that counts, but who counts the votes.’

SAVE GENERAL ELECTION NIGHT CAMPAIGN
That this House is concerned at reports that growing numbers of Returning Officers are considering postponing the counting of votes cast on the day of the General Election until the day after polling; believes that in the 21st century it would be a regressive move not to announce constituency results as early as possible;

further believes that public confidence in the results could be undermined by delays in the counting of ballot papers and that fewer voters would be able to watch the results being announced if this were done on a Friday afternoon; and calls on local authorities throughout the United Kingdom to ensure that all ballot papers are counted immediately after the close of polls on General Election night, as has been the practice in previous General Elections.

2 Responses to “Campaign To Save Election Night Fails”