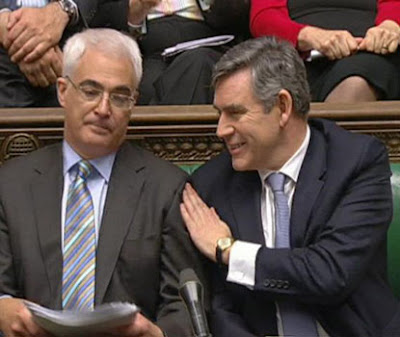 Make no mistake: Britain – as even Darling came close at one stage to admitting – is facing one of the two or three worst financial crises in our national history.
It is of such severity that it can be ranked only in scale alongside the desperate economic crisis of the early 1930s and the famous banking catastrophe of the 1870s which brought the City of London, and much of our industrial base, to its knees.
At such a grave and terrible time as this, our country deserved a wide-ranging, credible and, above all, courageous plan to balance the national books in the medium term.

But as he goes on to say, Brown and Darling are still playing politics and are not taking responsibility for the situation at all –

Tragically, we were not offered any such thing.
Instead, Darling commented: ‘This is not the time for a spending review.’ Such a grossly irresponsible remark will undoubtedly come back to haunt him.

Could this be the turning point?

Will markets decide that Britain has failed to live up to its AAA status and must start to pay more for its borrowings?

Will Cameron’s position in opinion polls start to strengthen once more?

In short is this the final act of irresponsibility, that breaks the faith of financiers, investors and voters?

It should be. But as the media will never call time on New Labour’s thirteen-long year lease of power, the propaganda machine could still have one or two more rolls of the political dice left up its sleeve.

Even if it does, the basic situation will not change. Labour has blown its credit as well as its credibility – Blair, Brown, Mandelson, Campbell and now Darling have all played for short term political gain, sacrificing the long term trust of the electorate in the process.

If the Conservatives return to power and put it all back together again, this time they must not only fix the economy, but also the media which has become too concentrated and too powerful. The BBC must not be permitted to dominate in the way it has done under Labour. Europe too has become far too powerful, as well as the quangocracy. They must be all cut back.

This election will not be simply bringing a change from one wing of politics to the other, if Cameron wins. It should be a total revolution, casting out the short term, corrupt, bankrupting and demoralising ways of the whole Labour edifice, and allowing people somehow to manage for the long term, to build a world that it is worth living in once more, where it is worth taking responsibility, investing for the future, and hoping that better will be possible.

But before we can dream of a better world, there is the fear that the Labour spin machine is now so involved in malfeasance that they could yet use postal voting and ballot box tampering to rig the result of the election. These are evil men, more concerned with power than they are with anything else. Many believe they have rigged the recent byelections such as the one in Glenrothes. Many also see that there was largescale cheating in the General Election in 2005.

Britain’s long Labour nightmare is not over yet.