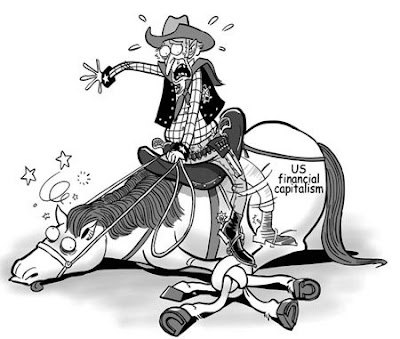 According to the Institute for Fiscal Studies, if only half of Labour’s planned fiscal tightening from 2014 onwards comes from squeezing spending, then spending by government departments will be reduced to below the level Labour inherited from the Conservatives. All Labour will have achieved is to take us back to where it began – except with higher taxes, and double the level of government debt. It is an experience the country will never wish to repeat.

That was written by (The Rt Hon) Norman Lamont, a man who more than most must be able to understand what Labour has done to our economy.

But does even he have any handle on how big the debts might be lurking in the accounts of the banks? These could put the debts of the government into the shade, if the opinions expressed on the US blog www.infowars.com turn out to be true.

No one that I know understands financial derivatives.

I don’t have much clue. The best parallel I can find is that it’s as if someone invented a networked computer game that has run away with itself, making trillions of points for the winners and losing trillions for the losers. The only trouble is that it is not a game.

The points are dollars, and the losses are now being inherited by national governments, who have to bail out their banks, who are the losers, or their economies face catastrophe.

The profits, meanwhile, are held by some international organisation, which is so big that it has, allegedly, the power to manipulate markets to order, and always win the game. They are now so wealthy that they can now also control the political processes of the largest countries. 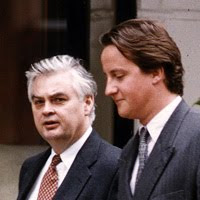 PICTURE – Lamont when in office, with his then junior David Cameron.

In effect there has been a fraud on such a vast scale committed against the free countries of the world that the previously sovereign nations are now in effect puppets, totally dependent on the willingness of the ‘outsiders’ to lend. There are many secret transactions not shown in public declarations. The politicians have been inserted by the outside forces who also control the media.

No one knows how to unravel the mess.

Lisbon has secured the sovereignty of the Europeans, and linked them into the system, shepherded by Sarkozy and others who love the feeling of power in their hands.

Is this some kind of insane nightmare? I don’t know. But the story stacks up well enough against the things we do know. We hear of toxic assets, of paper based on paper, of vast values such as 50 times the GDP of the USA, bloated in value to levels, which cannot possibly be bailed out. Some say the value of all derivatives are now US$1.5 quadrillion dollars. (how do they arrive at such figures? I guess no one really knows, and until they do know how large the problem is, the stories can expand accordingly).

The sums have simply grown and grown since the US Congress was persuaded to get rid of all Positions Limits in futures markets in the 1990s, which is when the trouble started.

One sentence from the video below is this ‘The CEOs of America and elsewhere have become fabulously wealthy following a strategy based on fraud’.

To make up your own mind, follow the evidence presented. The debts will, if as vast as they claim, take generations to pay off.

The game is still playing on. Somehow the nightmare, however bad it is, will have to stop, and controls be brought back in. The problem is that doing that is not going to be easy or pretty. Everyone will be a casualty to some extent once the derivatives bubble is burst.

The money, though will be the least of the problems. Putting the sovereignty of countries back together again, and wresting power from the internationalists will be the most daunting task.