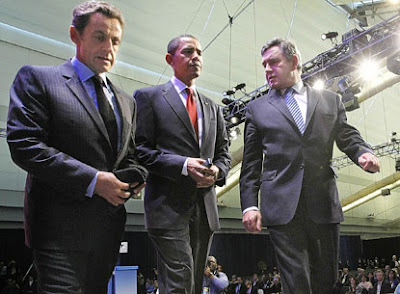 The climate talks are stalled in Copenhagen as countries that made rash promises during the good times on how much they will cut their carbon emissions by 2020, are suddenly finding that economic imperatives inevitably take over over during an economic downturn, and the need for cash replaces all the high-minded and idealistic notions of the boom.

Mark Lynas of The Independent is not sanguine about a “success” though.” At this rate, Copenhagen will be a disaster,” he says.

With just hours left before the “high-level” segment (with ministers, and – increasingly – heads of state themselves) begins, several different texts were in circulation, all laden with square brackets (indicating disagreement) around even minor issues of contention that should have been resolved last week.

The same situation is happening with the Euro, at the very same moment.

All has been sweetness and light with the Euro since its launch in 1999, as economies have only grown since that time, until recently, and anything could be offered while the sun shone. But now it’s raining again. The recessionary and debt-fuelled chickens are coming home to roost, and all those easy commitments made in the good times, are falling by the wayside.

The FT reports that Greek trade unions have vowed to go ahead with a 24-hour strike tomorrow, further undermining the Prime Minister’s efforts to push through reforms to calm market fears of a sovereign default. Measures announced on Monday – including a freeze on monthly salaries above €2,000 and a 10 percent cut in allowances – have incensed public sector trade unions, although lower-paid workers will receive above-inflation increases next year.

Greeks don’t buy into fiscal discipline as easily as Germans, it appears.

The FT argues that “with Greece’s budget deficit at record levels and the country’s banks exposed to troubles both at home and abroad, doomsayers are predicting that Greek banks will go the way of Iceland’s.”

Meanwhile, Reuters quotes Norbert Barthle, senior budgetary spokesman from Angela Merkel’s party, saying that Greece is “just the tip of the iceberg”, pointing to Italy, Spain, Ireland, Latvia and Hungary as other EU countries with economic problems. He added, “It’s not the job of the EU to rescue bankrupt states”.

Now come on Germany. Which is it? Either the Euro matters. In which case it will be Germany’s task to hold it all together. Or it doesn’t matter. In which case, the Euro’s value will continue to plummet, as the confidence of traders cracks.

El Pais reports that EU Commission President José Manuel Barroso yesterday ruled out the possibility of creating a joint Eurozone bond market. He is quoted saying: “It does not seem to me very appropriate to think of such a measure with regard to specific situations, because it could convey a wrong idea”.

So all the champagne quaffed in celebration at the Euro and its crucial role in the process of ‘ever closer union’ was simply theatre, enabling a decade long meaningless binge to take place. When all was plain sailing, the easy tune of ‘we’re all in the one boat altogether’ played continuously, but as soon as the shit hits the fan, each country is now facing the downturn alone.

The words are a complete reversal of what the Germans were saying nine months ago, when it was stated that no country inside the Euro would be allowed to fail. Now it seems that they all will be allowed to do so.

Is this the week when reality began to impact on the brains of the world’s leaders? First, America won’t budge in the climate negotiations. And now European leaders won’t contemplate giving hand-outs to save the bankrupt sovereign states inside the Euro.

Let’s take a look at the faces of the world’s leaders today as pictured in Copenhagen. Yes they do all look a bit serious. Even Gordon Brown looks a little unsettled by it all as he offers a few more of Britain’s non-existent billions to try to save the climate talks.

After years of everyone saying YES, and never mind the consequences, is this the week when the word NO crept back into the world’s vocabulary. No, we say. NO. NO. We cannot afford it all. NO.

Any sane individual could have told them this would happen a few years ago. But that’s politics eh? People vote on the promise, not on the delivery of the promise. All you need is a bottomless pit of money, and the promises need never stop.

Until that is, the money runs out.

Today is December 16th 2009. The day the word ‘NO’ became fashionable once more. Remember the date. It might be an important one in economic and political history.

Brown won’t accept that a thing has changed, of course. This wasn’t meant to be happening until after his electoral date with destiny.