Just imagine for a moment that you are in charge of Labour’s election strategy with the election coming in up to five months time. Imagine that you are pretty confident. And that is because you have been able to harvest a record number of postal votes, which make it almost impossible for the Conservatives to win a majority. Yes, you would be feeling pretty chipper, I would say, as Brown most clearly is seeming this week, judging by his much-improved PMQs performance.

Your problem, Mr Brown, though is not going to be winning the election, by the use of such means. After all, 2005 showed that it can be done easily enough.

Your problem is going to be getting away with people believing that you achieved the result without cheating, that it was a fair result, and not rigged in any way.

In other words, you have to prepare peoples’ expectations.

So that even with the Conservatives consistently on 40%, and Labour and Lib Dem equally around the low 20%s, in polls, a Labour victory can somehow be presented as a fair enough result.

The key to succeeding in this endeavour is to bring out media narratives which make the Conservative lead, in peoples’ minds, somehow magically disappear.

The first attempt to introduce the people of Britain to a convincing narrative that the Conservatives will not win the election, was what I now refer to as HPN1 – or Hung Parliament Narrative Number 1. This ran across all media for three weeks in November, and as I blogged at the time, unless the opinion polls started to reflect the narrative, it was going to be looking a pretty foolish one before long.

Spot on cue, Ipsos MORI came up with the perfect poll, showing a mere 6% Conservative lead, down from other polls giving up to an 18% lead. ‘This is the one we’d been waiting for,’ I wrote on Political Betting.

The number crunchers who frequent that site, not least Mike Smithson himself, the site owner, went over the Ipsos MORI figures and found that a mere 50 people had been interviewed in London, from which a sizeable Labour lead had been deduced.

It didn’t take them long to call the Ipsos MORI a rogue poll.

Despite it being an almost ludicrous result, based on, at best, poor fieldwork, that didn’t stop the whole of the MSM writing and reporting their opinions, based on these findings for another ten days or so. That’s how you know it’s a ‘narrative’. When every Tom Dick and Harry in the media all say exactly the same thing at the same moment as if they were all glove puppets programmed in what to say by a hidden hand, that’s the clue. That is exactly what is happening.

But for HPN1, the problem was simply that no one believed the figures being given out by the media. Despite wall-to-wall lie manufacturing, as used to work in the 1990s and most of this decade too, people were not buying the story.

As Goebbels said you can only expect your lies to be believed, as long as you keep real world effects which deny your truths, from happening or being visible. And yet people know, only too well, now from their own lives, that we are in a different era. We are in a major recession,with all that that entails.

The problem for the election riggers is how to make it seem natural for voters not to punish the government for ruining the economy.

They have to find a way to convincingly prepare expectations to make the result they have already decided upon, seem plausible. It is possible they have left the narrative-rigging too late, as most people have formed the view that Cameron is electable a long time ago, and he’s been holding big opinion poll leads for over a year now.

But despite that, they have to find a way in advance of the election, to ensure that the result they are determined to engineer, is one which can be explained and justified. That is after all the task they’ve been set. So narrative watchers need only be on the lookout, and you can rest assured that more attempts will soon be on the way.

Again bang on cue, this morning, with HPN1 discredited and fading from view, up comes Hung Parliament Narrative Number 2 (HPN2), all bright-eyed and bushy tailed, hoping some mug might fall for it. 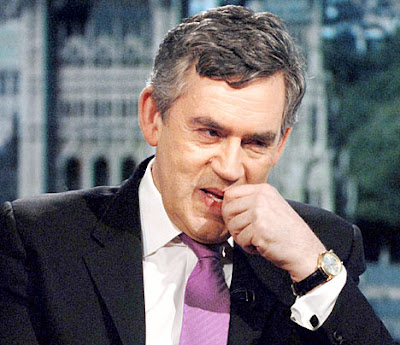 It appeared first in The Times, and is immediately recognisable for what it is. This time it is not an attempt to rig the figures directly, or not by quite as much as last time. This time, it is a bald statement that, while the opinion polls do reflect current opinion, about 8% of the electorate will, despite that, decide not to vote for the party they are saying at the moment that they will support, but, when the election actually comes, they will amazingly vote for Labour, for tactical reasons.

Again it has to said that this is another fair old pile of bollocks. But for what it is worth, here is HPN2 as quoted by The Times today –

8 points? Many polls are showing 17 points, but never mind. They managed to get ICM to give a 10% gap which is close to 8% ish. It would deliver the Hung Parliament which is the key thing they are trying to get across.

They (Labour) say that a third of Lib Dem voters have suggested that they might vote Labour, which would equate to 5 percentage points. Meanwhile, they believe that the numbers currently saying they support “others” in polls — greens, BNP and UKIP — may go back to Labour, closing the gap by a further 3 percentage points..

The expert opinions on Political Betting, who are forced by their professional standing not to call a spade a spade, in the way that I do, are very far from convinced that Labour’s HPN2 makes any more sense than their HPN1 did.

As I say, HPN2 like HPN1 is what you and I more usually would call a fair old load of crap. But allow Mike Smithson to use his learned university language to place this statistical exceta into its correct location….as follows –

I’ve found it quite hard to work out what it can be based on. Certainly there must be a reasonable expectation that Labour will do best from Green voters but big blocks of UKIP and BNP backers would appear to be much more likely to go to the Tories who look set to be the biggest gainers as “others” get smaller. Indeed it’s been the recent rise of this segment, rather than Labour advances, that’s been behind the Tory fall-off in support.

And I’m far from convinced about the “one in three Lib Dems” assertion. The current evidence is that they are more evenly split and there’s little to suggest that a move on that scale of the report might happen.

There’s little doubt that the 13% – 18% aggregate share for others currently being reported will get smaller as we get nearer the day but the Times report suggests a level of wishful thinking.

Isn’t it outrageous that our own government continues to insult our intelligence with these barmy narratives, and isn’t it truly shocking that they expect to get away with rigging the election?

To me it’s all so flippin obvious that this is the game. I even wrote yesterday on Political Betting, that the defeat of HPN1 made the launch of HPN2 any day now, inevitable. And blow me down, the very next day, here it is!!

Read the report and comments on Political Betting.

And read The Times where HPN2 was dropped off HERE

It is quite extraordinary how so many elections across Europe in many different countries seem to turn on less than 1%. Today’s reported election is in Romania, where the incumbent President clung on by half a per cent or so. There were cries of foul play, as ever. Are there any elections now that can be trusted in the world? The USA has its concerns occasionally.

Maybe Canada, Australia and New Zealand can still run a fair election, but Britain I’m ashamed to say, would not be in the list of countries where the results of a poll can still be trusted. In countries where polls are rigged, much effort is put into building up expectations of the intended result.

EUobserver reports that incumbent Romanian President Traian Basescu seems to have narrowly defeated centre-left leader Mircea Geoana by 50.37% to 49.63% in yesterday’s Presidential elections. Irregularities and fraud claims could lead to a re-count or to legal challenges of the end result, dragging out the official outcome for days yet.

Someone is clearly not happy with the result, but what can anyone do once the system is corrupted? Watching them playing around with expectations is one thing you can do, as that has to take place in public. It is a dead giveaway when they put so much effort into doing it.