I spent three years of my youth from aged 17 years to 20 at Oxford University studying Law. These were the years 1972-1975, the same moment that various people from our generation who were later to become famous attended the University, including the Blairs. I was not all that keen on politics or taking life all that seriously at the time, but was excited by the idea of going into business, primarily as I enjoyed the buzz of planning ventures and finding ways to get them off the ground. Business became my career and is still the way I make a living today, although, largely due to health and age, I now spend more time occupied in leisure pursuits which include blogging.

At that time, which was pre-Thatcher, my fellow students always surprised me with their anger that I openly stated that I wanted to be a businessman. I was about two years younger than the average age for my year, and from a public school background. Most were highly politically motivated in a leftwards direction, and it would not be unfair to say that, for some, I became a hate figure for being so cheerful and determined to make my own living by taking measured risks. I was lectured, for example, that a pound in my pocket was a pound of work done by someone else, an idea which always confused me. Socialism was the main religion at that time and place, and I was offending its fundamental beliefs.

I didn’t take much of this kind of thing too seriously, enjoyed my years there and then was happy to get out into the real world at the end of it all, where common sense seemed to prevail. My fellow students were a bit of a worry though. What would they go on to do in the real world with their minds so heavily coloured by ideas of class hatred, and dislike of commerce. I remember being amused when quite a few of these ‘Communists’ ended up going into banking. I remember chuckling that the idea of making money must have found its way into their minds instead, once they hit the real world.

I was wrong. Reading a report on the Fabians today, I see that working their way into the Establishment was the chosen method of this generation and others to ensure they got into powerful positions from where they could destroy the capitalist system. Blair was of this era, as was Cherie, Mandelson and literally thousands of others.

In the comments, there was one this morning (I don’t get many!) from John, which brought all these thoughts to a head after thirty five years in which I hadn’t really given this much of a thought. He gave a Link to a website which explains the Fabians, a society to which many of these people belonged. I had never really bothered wondering much about what they believed in in detail, as the word ‘leftie’ did for most of the people I knew, and the amount that I was bothered.

But after seeing how New Labour have decimated all the institutions of this country, and how they are now finalising the wreckage of our economy with massive borrowing, I find that I should have listened a bit harder to those ‘lefties’ I knew at university. They were already planning the destruction of the way of life that I believed was best in 1975, not only for me but for millions of others, and it appears that now they are getting very close to succeeding.

Some of the more erudite members of the wealthy and intellectual classes of England formed an organization to perpetuate the concept of collectivism but not exactly according to Marx. It was called the Fabian Society.

The name is significant, because it was in honor of Quintus Fabius Maximus Verrrucosus,
the Roman general who, in the second century B.C., kept Hannibal at bay by wearing down
his army with delaying tactics, endless maneuvering, and avoiding confrontation wherever
possible.

Unlike the Marxists who were in a hurry to come to power through direct
confrontation with established governments, the Fabians were willing to take their time, to
come to power without direct confrontation, working quietly and patiently from inside the
target governments. To emphasize this strategy, and to separate themselves from the
Marxists, they adopted the turtle as their symbol. And their official shield portrays an image
of a wolf in sheep’s clothing. Those two images perfectly summarize their strategy.

It is now 1884, and we find ourselves in Surrey, England observing a small group of
these Fabians, sitting around a table in the stylish home of two of their more prominent
members, Sydney and Beatrice Webb. The Webbs later would be known world wide as the
founders of the London School of Economics. Their home eventually was donated to the
Fabian Society and became its official headquarters. Around the table are such well-known
figures as George Bernard Shaw, Arnold Toynbee, H.G. Wells, and numerous others of
similar caliber. By the way, the Fabian Society still exists, and many prominent people are
members, not the least of which is England’s Ex Prime Minister, Tony Blair.

If ordinary people understood that the destruction of the economy and of the country’s institutions was a deliberate programme of government, hidden from view of course, including a willingness to hand over power to rule Britain to international organisations beyond the reach of democracy, I wonder if they would hold so much enthusiasm for the Labour Party.

The emotions of class hatred run deep in Britain, and the media is heavily infiltrated by people with the same mentality as the Blairs, who see Conservatives as the bitter enemy. But how low do they want us all to go in the name of destroying the existence of privilege. The rich will always find a way to recreate themselves, offshore or as non-doms.

By destroying the country’s institutions, those without money get hurt badly. Standards of education keep tumbling. The NHS saves only those who tick the right boxes. The rest are left to die. The Army is sent to war without even the most essential equipment. Judges start to legislate according to the secret programmes of justice that they and their secret appointers believe in. Paedophiles are increasingly tolerated. Those who try to defend their homes and their families from attack are sent to prison.

It’s the odd thing about the most intelligent people, the kind of people I was at University with, and who are now in control of Britain as assuredly as they are wilfully destroying the place, is that their undoubted intelligence deprives them of the common sense that more ordinary minds have no difficulty in perceiving. It should be noted that good government will not come not from the overly educated mind, with its obsessions, but from more common sense with slightly lower IQ.

I don’t mean to be rude to Eton, but in amongst inherited position, can maybe be found better service than amongst those who owe everything they have to being top of the class at school. I should know! The need to keep achieving and always being on top inevitably ends up in disaster. Look at Blair struggling to sound impressive at Yale. It’s embarassing. Why not get someone not with a double 1st, but someone with a useful 2:1, and maybe someone whose political education was not informed entirely by 1960s and 1970s industrial strife, who can see beyond the bitter conflicts of the past, to a more contended view of the world.

In fact why not indeed vote for David Cameron. Until New Labour’s angry and destructive student politicians have been silenced and removed, Cameron’s new more adult contentment will not easily be heard. But there is a second voice, espousing the same kind of values, a pea from the same pod, with a stronger and sharper edge to cut away the evil of the secretive destroyers, in the Mayor Of London, Boris Johnson. There is, it appears, a new generation of believers in the good that Britain can be, determined to give the message to the people. I sincerely hope that the people buy, and can see through the massed ranks of angry and bitter backwards-looking media placemen, bankers, educators and sycophants, to a better and more optimistic way of seeing people and their place in the world. 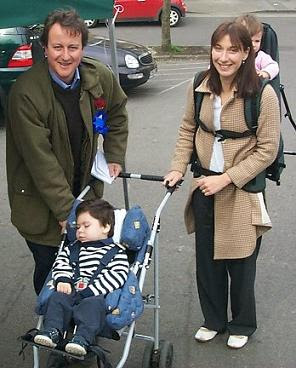 We need the positive to start winning, urgently. The free world is running perilously close to the abyss that left intellectuals have been working towards a very long time. Thatcher defeated the industrial left. It must be the task of this generation of Conservatives to defeat the far more sinister and well-dug in intellectual left. Cameron has to win the coming election, or Britain is truly and probably permanently finished. We have a clear choice – the sadness and bitterness of the past which resides in the soul of Gordon Brown, or a belief in a future for Britain which is expressed quietly but strongly by David Cameron. 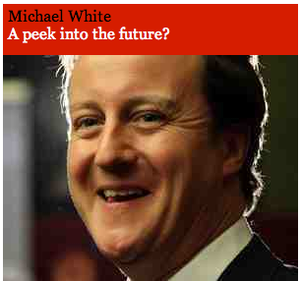