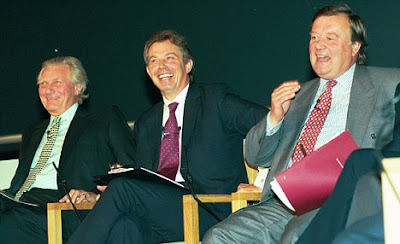 Eurosceptics have taken the signing of the Lisbon Treaty very hard. They feel trapped. They are angry and they want to do something to express their anger. Reading blog threads shows that many see hope in the barmiest places. I try to broaden the debate where I can, and calm things down a touch.

As the French Resistance realised in the war, the only place you can be finally enslaved is in your own mind. If you are able to maintain an independence there, and you possess a refusal to accept the fate that has befallen your country, you are still free. In the war brave souls went to their deaths and worse, because in their minds they were unable to accept their enslavement. I still feel free as a bird, despite Lisbon, because I have no doubt for one minute that we will find our way out of it all. The problem as of right now is the universal self-defeating pessimism in the eurosceptic community. If nothing else, I would ask people to remain cheerful and optimistic. If in your mind you are still free, then you are still not captured.

Because I challenge the universal pessimism I find in places such as EU Referendum (partly the fault of the editors Richard and Helen, who are that way inclined – while respecting their skills as analysts), I am often asked how do I hold the views that I do. I wrote this reply to some queries this morning, and thought I would drop it off here too as the same kind of traffic is hitting my blog, judging from the few comments.

I would only say that the debate has been getting very one-dimensional and hung up on UKIP, which provides no solution.

There is the hope/fear about Cameron. One minute he’s a great eurosceptic about to hold a referendum on the Lisbon Treaty. The next he’s a sold out europhile pretending he will repatriate powers which he will find impossible without bargaining position which he doesn’t possess. Maybe the next reincarnation he’ll be a great eurosceptic once more. But in the pre-election period, he is unlikely to do so.

Power resides in the media. If Cameron takes on the media head-on and becomes what you want him to be, he will lose (Nearly) all media support, and especially the BBC which is 70% of UK media. As most people don’t understand that, he would lose the election or the Hung Parliament becomes the next most likely outcome, as people still amazingly tend to believe what they hear and read. The UKIP offer to stand down was a farce if you read the details. It was not even a certain offer to stand down. It was only a possibility, as long as Britain was fully OUT. UKIP is part of the media game, pretending to be a viable political party, promoted endlessly by the BBC because it pulls support away from Cameron.

The other side (us) want him to give us promises we want to hear (referendums), and many are threatening Cameron with dastardly consequences (like voting UKIP!) if he doesn’t satisfy our yearnings. But until you (we – I’m as OUT as they come) are cursing and swearing blue murder against him, Cameron cannot get media support.

Yes he has James Murdoch onside (who you might remember ran the anti-EU Constitution campaign) but Father Rupert is far less sure that James is doing the right thing, preferring to back the sell-out of Britain, as he did throughout the Blair/Brown years.

The most reassuring thing for Conservative Kremlinologists is to see how Ken Clarke and Michael Heseltine led the narrative that there will be a Hung Parliament after Cameron promised repatriation of powers. There is no surer sign that the EU feels threatened and uneasy with Cameron, when their placemen open up against him. If Clarke was quiet and not operating against Cameron, I would be a little worried, but seeing the fat slug on operations supported by the worm, is highly reassuring.

The economy is the other problem (politically). The QE programme has sent stocks and other asset prices on the fastest bull run in history. When markets were crashing, Cameron was recording Landslide polling results, so it is little surprise to find him in less favour now markets are swinging upwards. Brown will use this method of fixing the economy costing GBP 200 billion a year until after the election. If it is a Hung Parliament, when QE is switched off, markets will fall, and attitudes against Bull market phenomena such as the EU will get ugly once more. Cameron has to sit out this phoney phase as Brown’s cash sloshes around the stock market.

Thanks for asking my thoughts. I am sure you won’t agree but at least you want to know how some other deluded individual manages to form the views that I do!!

PICTURE AT TOP – The Launch of The Britain In Europe Campaign in 1999, the moment it seemed as if Britain would disappear without trace, and the Euro had become a certainty. Oborne describes best who it was that stopped the Euro, writing in The Dail Mail …

Reporting the ‘Britain in Europe’ campaign at the time, I remember with what gusto all these eminent figures ridiculed and sneered at the embattled Tory leader William Hague, who was leading the opposition and going round Britain in a battle bus calling on voters to ‘save the pound’.
Today, a decade on, I believe that Blair (who dismissed William Hague as ‘shrill’), Heseltine and the other promoters of ‘Britain in Europe’ owe the public a huge, collective apology. Had Britain joined the euro, our economy would have been shattered.
As for William Hague, history has proved him right.

David Cameron’s “reverse” on Lisbon has resulted in the Conservatives losing support to UKIP? In theory this seems plausible. Europe is an issue with very low salience as Ipsos MORI’s monthly issues monitor repeatedly shows (this month’s poll found 3% of people think it is an important issue), however, that tiny minority do care about it a very great deal and it is possible that it would shift their vote. The theory looks very strong if we look at ComRes’s polling over the last two months – prior to David Cameron’s announcement at the beginning of November they were showing UKIP at around 3% of the vote. In their two polls since then they have shown UKIP at 5% and 6%. However, other polling doesn’t back it up – prior to Cameron’s announcement YouGov were consistently showing UKIP at 4%, and in their two polls since the announcement UKIP have stuck resolutely at 4%. The other companies have also failed to pick up any great jump in UKIP support. Taken alone ComRes’s polls are pretty convincing, looked at in the wider context, I’m not so sure.

The article concludes that Brown is not being challenged for the leadership pre-election, and the economy is recovering, which explains the closing of the gap in polling. See Why The Polls Are Narrowing.