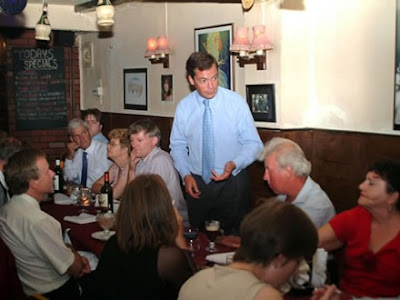 Nigel Farage’s campaign to win the Parliamentary seat in Buckingham for UKIP must be going better than many thought. Political Betting’s Robert Smithson, for example, was taking bets against Farage last week, scoffing at Farage’s supporters, or those like me who thought Farage stood a good chance of being elected.

John Bercow, as it is turning out, now seems to be a worried man. And he is trying to find a way out of the contest. He is saying, in effect, that if UKIP breaks the convention of standing against the Speaker in elections in Buckingham, no Speaker’s seat would ever be safe again. He is suggesting a small Constituency be established for him to win, called St Stephens based on a tiny area around the Palace Of Westminster.

Some details of this story can be found in The Daily Mail HERE.

I doubt Bercow would be saying all this if he felt secure in his Buckingham seat.

It seems a little late in the day for such Constitutional shenanigans, I would have thought, but I suppose The Political Class would likely want to run and save their darling Bercow from humiliation at the hands of Farage if that is what he fears.

But to be honest, I would suggest that running away and hiding would be even more humiliating for the precious little darlings, would it not, than losing an electoral battle fair and square.

Bercow played a foolish game over the Lisbon Treaty referendum vote in The Commons earlier in the year, first of all publicly backing the policy, and then changing his mind when the vote actually happened, and voting against it. At that moment, of course, he would have had no idea he would be facing Britain’s primary eurosceptic champion in his own Constituency, and he imagined he could shit on British democracy with impunity.

Had he stayed loyal to the referendum and voted for it, he could have pleaded to his Constituents that he was a reliable eurosceptic, as he has done so often in the past. Even then many had suspected his euroscepticism was purely an act to keep him onside with other Conservatives and that now appears to be the case.

It now appears that either Bercow could, indeed, be slung out by his frustrated eurosceptic voters in Buckingham, or he will escape to the sanctity of yet to be created ‘St Stephens’. But as Conservative MPs didn’t approve Bercow’s appointment in the first place, as he was appointed by a majority of Labour MPs not Conservatives, it seems that few Conservative MPs are keen for him to continue as Speaker anyway. One might ask if it is really worth all the run-around, as a COnservative majority in the election could quickly terminate Bercow’s tenure as Speaker anyway. Bercow is in trouble, on all fronts.

If he runs for cover to St Stephens, that would in turn allow the major parties back into Buckingham, but Farage, who might at one time, have been presented as a carpet-bagger, could now be credited with sending Bercow packing, and be seen as a political winner, deserving of support.

And another thing, who would want to come in at this stage, and stand against Farage, after he has already effectively felled Bercow? I would not like to be the Conservative PPC selected this late on to see off Farage. Buckingham Conservatives might decide that Farage should be rewarded with the seat regardless.

Surely now is the moment for Lord Pearson to attempt that famous deal with David Cameron. He should offer to withdraw UKIP from 100 marginal constituencies across Britain, on condition that no Conservative would be put up against Farage in Buckingham? Now how about that idea, Dave and Malcolm? The COnservatives get an extra fifty seats and UKIP get their first. That must surely be good business for all parties.

Might I suggest a second more purposeful approach be made to Lord Strathclyde by Lord Pearson, once the Bercows have taken flight from Buckingham.

The Daily Mail report -\Speaker John Bercow wants to switch to a new seat with only MPs as his ‘constituents’ so he can avoid a humiliating defeat by former UKIP leader Nigel Farage at the nextGeneral Election.
It would mean abandoning his Buckingham seat for the newly created one called St Stephen’s – the name of the old House of Commons chapel – where, effectively, it would be impossible to challenge him.
He put forward the idea amid speculation that he may struggle to defeat Mr Farage, who stepped down as UKIP leader to take on Mr Bercow in defiance of the custom where the Commons Speaker is not challenged by the main parties.
If the tradition ended, said Mr Bercow, it could be hard for any Speaker to survive for more than one parliamentary term.
Mr Bercow suggested giving the Speaker ‘a separate constituency, known as St Stephen’s, representing a small area around Westminster’.
The Speaker’s original constituency would hold a normal election and choose a new MP, he explained.
‘The Commons can always decide to do that if it wants,’ he told Total Politics magazine. If MPs supported such an idea, he would not oppose it. Ordinary members of the public would not be allowed to be ‘constituents’ of the Speaker’s St Stephen’s seat.
Any Election challenge would have to be made on an individual – not a party – basis, making it harder to unseat the Speaker.
Mr Bercow said: ‘It is both possible and necessary for the Speaker to continue to be a highly active constituency MP.
I suspect I won’t face major party competition – but I will face opponents.’

Bercow also floated the idea, which I had not heard before, of having the Speaker represent a new, tailor-made constituency called St Stephen’s. He did not back the proposal, but he suggested that it would one solution to the possibility of the Speaker losing his seat at a general election.

Bercow is seeing St Stephens as a possible avenue as a way back in if he is defeated in Buckingham, it appears. He is not planning on running away just yet. Maybe a turf trade will not be quite as easy as it initially appeared from the Daily Mail article. Oh well. Worth the thought as events keep changing.