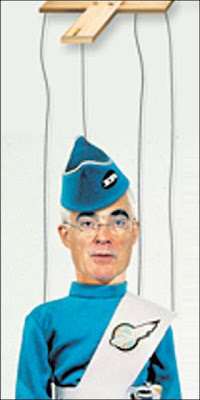 People in Britain are saying that Ireland had the PBR we should have had.

But that is not to understand.

Savage pay cuts in the Irish public sector are only matching those that are already happening in the private sector. Ireland is locked inside the Euro, and cannot get any help from a falling currency. So wages have to take the strain.

The Euro is desperately trying to stop the haemorraging of the PIGS – Portugal, Italy, Greece and Spain, where fiscal discipline is a contradiction in terms. Greece could soon be disconnected and find her Euro as a second single currency (as it were)…maybe within a year from now.

Unlike the Greek government, the Irish government is terrified of being thrust out into the cold and separated from the Euro, and cutting government spending to within the EU’s limits is forcing the savage cutting in living standards. It is not only fear of losing the Euro that is impacting on Ireland, however. As Sterling falls progressively against the Euro, Ireland finds her main export market (The UK) increasingly hard to sell to.

If Darling has inadvertently engineered a Sterling crisis in the coming months, that crisis would also bring Ireland a trading crisis of huge proportions, as her economy is priced out of business.

Ireland for once is cutting back on the gravy, but she faces an unenviable array of risks. The UK is free to squander her inheritance, and see her currency fall if she wishes. It will be the same dreaded international bankers who enjoy such big bonuses who could pull the plug on Brown in the end. The delicious AAA rating cannot last endlessly while the government has to borrow GBP 200 million year after year.

But please Dear (or Darling!) critics. Would you really want to be Ireland right now? I don’t think so!!!