It occurred to me today that eurosceptics are fighting the wrong war. The EU is not the centre of power we all believed. It is a front. We are told this by none other than the President of the EU Herman Van Rompuy. In his first public speech, he announced that the era of One World Government has arrived.

What did he mean?

What he said, I would suggest.

He is saying that he is not the leader of Europe that we imagined he would be, but a servant of the One World Government. He is only President of Europe in name.

He is an employee, a servant of a higher authority, which is partly working through the EU to deliver its programmes.

Right. OK, but Herman, who are these people that we’ve never heard of before, who you say now rule the world?

It is interesting when the likes of Gordon Brown and Van Rompuy talk of the New World Order and One World Government that they never give any names as to who is in control of the NWO and OWG. They give no address as to where these structures and organisations can be found. And yet they must have a clear enough idea as to who they mean. Why don’t they tell us what they know?

They are supposedly our President and our Prime Minister. We are their people. Surely we have a right to be told, who they are all working for. It clearly is not us.

Eurosceptics should stop worrying about the EU. According to Van Rompuy, as a centre of power, it is irrelevant, a smokescreen, acting for a higher authority. Why would he lie?

For those of us concerned as to who is directing our lives and our futures as of now, we should not waste our time talking of Gordon Brown or of Barroso or Van Rompuy. They are all hired hands, paid to produce a vast smokescreen for the real rulers of the world.

OK then. Next step. We don’t want to waste time talking to the monkeys. Where are the organ grinders?

What are their objectives? How do they see us as the people they now rule and control?

Too many commentators go into a racist phobic rant when they address the subject of who controls OWG and the NWO. Fear so often intervenes, and blocks out any common sense or rationality. But let’s not be fearful. Let’s just ask simple questions. Who are they? How did they acquire the power to rule the world? And what is their programme?

I mean, why don’t they introduce themselves and say Hi.

It is good therefore to find a knowledgable and professional commentator who has a good idea where the address of the OWG is located, and some idea of which individuals are in control of it all. We have to clutch at straws, and ask anyone who has any information at all. This of course is quite wrong. No aspiring government of people, should expect to work in anonymity.

There are so many questions.

Do these people have a conscience at all? Do they care about their families, other peoples’ families, or about money or about power. I guess the old saying that ‘absolute power corrupts absolutely’ would be of concern. But let’s not pre-judge these people, whoever they are. Maybe they are well motivated and desire only good things for the world. Maybe they are not all NAZIs, Leninists or Jews or whatever, but we would still like to know their names, and where their offices are, and where they hold meetings.

At least let’s not waste any more time on their employees, people like Brown, Blair and the host of other political pygmies at the EU. Let’s talk to the top.

But that’s the problem. Who exactly is it that we should talk to? Right now we don’t know.

But at least we do know, courtesy of the minute amounts of information we do possess that that is where we must start to look, and find the person or persons who are now controlling the world. 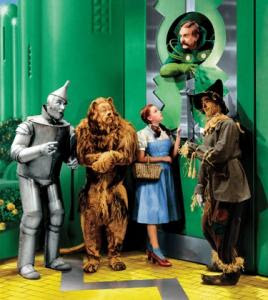 The charade of pygmy leadership has gone on long enough.

The EU is a vast nothingness, an enlarged Parish Council. National government is gone, a half remembered dream. Let’s find the real Wizards Of Oz, where the smoke and the mirrors are operated. So that this virtual reality in which we are now expected to live, is reduced gradually into the realm of the real. Names and faces, things like that. People. Warts and all. But where do we start looking? Is there a yellow brick road?

Excuse me, but is this where I can find One World Government?

One person who seems to have some idea and is willing to explain what she knows is journalist Joan Veon. She can be found talking all over Youtube. Let’s start with her, as we ramble around like animated puppets trying to find out who really rules the world. Why don’t we ask Gordon Brown who he is really working for. He must know.

There was one other video I wanted to feature in this piece. In an interview after the Crewe & Nantwich byelection defeat, Brown was defending himself against hostile and critical questioning, getting quite flustered. He distinctly used the words – ‘I followed my instructions’, words he quickly corrected.

The interview is no longer listed on Youtube which is a pity. But I still wonder exactly who it was, who was giving the British Prime Minister his instructions just a few months ago.