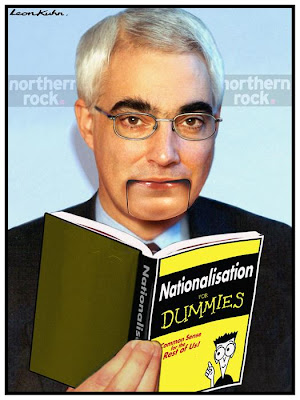 In the December Treasury UK Government Spending Outturn Reports, there are some detailed accounting tables, which I am about to comment on. The figures in the Treasury Tables are very similar to the figures given by the previous report I detailed a week ago. But this time, there is a new element added which at least gets the totals to relate to each other correctly. The new element is called mysteriously ‘Accounting Adjustments’. See HERE.

In the previous report, the sub-totals did not equal the grand total, and the reader with a calculator to hand, adding them up, was just left hanging.

I blogged the effect as ‘UK Government Spending 58% of GDP’, which the sub-totals added up to before the bringing in of these unexplained ‘accounting adjustments’.

There are no details provided as to what this adjustment might consist of. This adjustment alone is 15% of the spending totals declared. It should have been itemised I would have thought, and provided with an explanatory note. It is not.

The effect is to reduce the 2009 totals of government spending to fit The Chancellor’s forecasts, which would otherwise have been out by the same amount, GBP 100 billion – no less than 8% of GDP.

I would have thought that the government should be responsible to its citizens and explain what this accounting adjustment consists of.

It’s obviously a very great effort that’s been put in by The Treasury to accommodate The Chancellor’s forecasts and to fit them to the spending that has actually made. But there is a problem.

It leaves me feeling that government spending is probably far higher than is being admitted to, as why otherwise would the figures appear like this, and why would a GBP 185 billion value of account ‘adjustment’ not be explained in a way which an observer of the accounts could fathom?

It’s not something to do with bank takeovers is it?

Maybe someone from the news media could ask of HM Treasury why there is a total of GBP 185 billion of ‘accounting adjustment’ included in the 2009 Spending Outturn figures, reducing a spend of GBP 800 billion to a declared total GBP 615 billion or so. The accounting adjustments are three times bigger than any in previous years. What are they, and why are the figures so big?

Surely accounting ‘adjustments’ of this size warrant a note in the accounts, being 30% of the total declared value of government spending in 2009. These are not small figures, that seem are being slipped through without explanation.

Are expenses being reclassified as assets, for example? If so, have the relevant assets been valued at cost of purchase or at current market value, or by what method of valuation?

If these, by chance, happened to be the purchases of bank shares, a historic cost valuation method could currently be covering up a major market loss.

Take the shares bought by the government in Royal Bank Of Scotland as an example. These were bought at 65p. The shares are now valued at 29.5p and are consistently falling despite the general rise in other share prices. On this share alone the government has lost over GBP 10 billion on its 70% holding.

These share losses do not appear in government spending figures for 2009. Perhaps this explains the strange way that money s being accounted for. 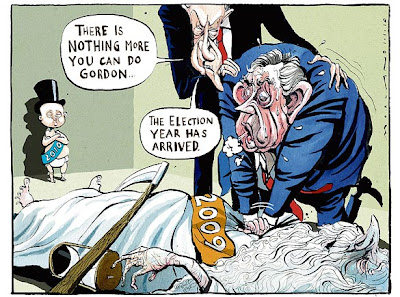 Not quite right, Morten. He could just have the decency to come clean as to how big the mess really is.

The losses on the share prices could only be the half of it. The toxic debts owned by the banks could yet wipe them out and require further large infusions.

But at least we could be given a current valuation of the assets purchased on our behalf by the government, declaring all losses or gains if any, and the net position. Losses should be added to the GDP % figure as expenditure, or negative expenditure if a gain (there are none to my knowledge). At the very least a provision for anticipated future losses might be made for such a large accounting item. Otherwise the accounts start to stray too far away from reality to be meaningful.

10 Responses to “Brown’s Banking Losses Not in 2009 Accounts”