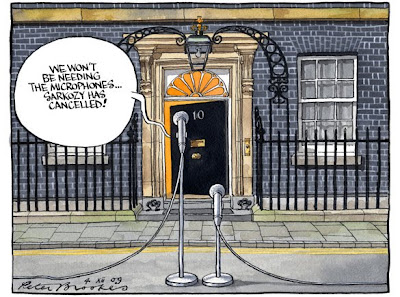 Peter Brookes. The Times. Nice one.

There seems to be more to this story than has yet come out. It appears that Gordon Brown was duped into believing he could dictate the terms of French overseeing of the City. But once he’d signed up Baroness (KGB) Ashton into EU Foreign Minister, Sarkozy just ignored the terms of their deal, and pressed ahead with total subservience of The City, down the level of the operations of individual companies.

It is clear from what Darling has said since, that the British side, for some reason, was not expecting this.

And yet any details of a split are yet to be reported. The cancellation of the Sarkozy parade around his new kingdom does tell you that Brown feels a little cheated by the whole affair. It was reported thus in the Daily mail –

Arrangements had been made for the French president to have talks in the capital, but Downing Street today said Mr Sarkozy would now not be meeting Gordon Brown for discussions on financial issues.

No 10 blamed ‘diary constraints’ for the visit being scrapped, but the decision to postpone the meeting was taken in Paris.

That last sentence sounds like a contradiction, n’est-ce pas?

Will there be any fightback, any reversal on the part of the French? It seems unlikely. The terms of the Lisbon Treaty were signed in great haste by Gordon Brown. He can hardly row back now. Sarkozy has conned him. 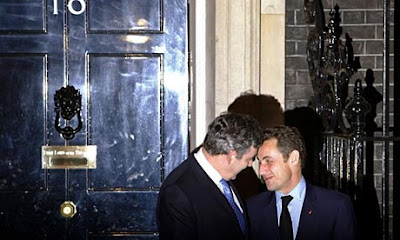 But it is so odd that he doesn’t seem to realise that he’s been had by Sarkozy, or maybe the scales have at last fallen from his eyes. You remember the huge charm offensive last year from The Poison Dwarf? The hugs and kisses? It was almost pornographic. It was certainly embarrassing.

Well the love affair has now cooled, you might say.

I hope that Cameron would not allow anyone close enough to be able to put one over on him, but so far he is silent on this tawdry affair.

Brown will, of course, eventually trade in for a nice little job after the election, sure enough. Sarkozy knows he’s soft as shit.

Britain, meanwhile, sinks deeper and deeper into the mire, at every betrayal. 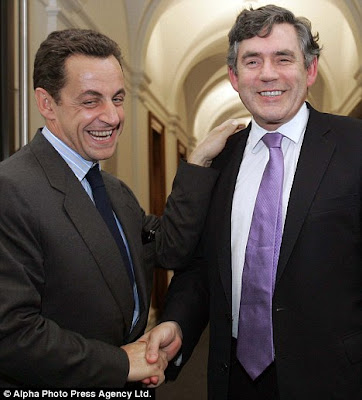 As so often Peter Oborne writing in The Daily Mail has the measure of the situation. His article today is called ‘Le Grand Stitch-Up’.

EXTRACT – The brutal truth is – as French President Nicolas Sarkozy boasted this week – the City of London is now squarely under European control.

He said: ‘Do you know what it means for me to see for the first time in 50 years a French European commissioner in charge of the internal market, including financial services, including the City (of London)? I want the world to see the victory of the European model, which has nothing to do with the excesses of financial capitalism.’

Barnier has been handed enormous powers over the City of London, and will not hesitate to use them. He can, if he wishes, regulate parts of the City out of existence.

There is only one politician in Britain who speaks out for us now.

His words yesterday were these –

Today Mayor of London Boris Johnson said Mr Sarkozy’s gloating will stiffen the Government’s resolve to defend it.
While bankers in the Square Mile were livid at the French president’s comments, the Mayor took the unusual step of welcoming them.

“Yippee! The best way to boost the City of London is for top French politicians to attack us,” Mr Johnson posted on Twitter. 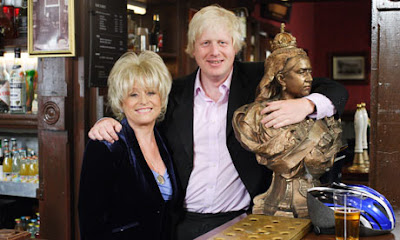 Let’s hope he’s right, and at last the British wake up and start defending themselves.

Brown and Darling have obviously made complete idiots of themselves by trusting Sarkozy. It seems that Britain as so often in its past has made the big mistake of trusting promises from ambitious foreigners. When will we wise up?

Boris, are you the only one with any balls? 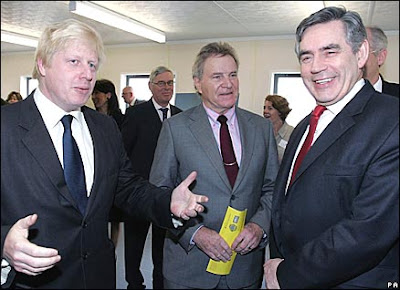 See my post March 28th 2008 summing up Sarkozy’s visit to London in which he seduced Brown – Sarkozy Takes The Piss.