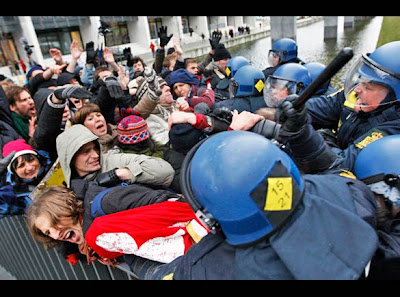 From where I am reading the MSM, I see few reports getting out of the violence being used in Copenhagen against those trying to attend the Climate Talks, but who cannot get in. I don’t mean that violence is being used against climate sceptics, but against people who all believe in AGW and have invitations and correct paperwork, but who are now excluded from the talks and are demonstrating outside.

For example there are 90 Friends Of The Earth delegates all with correct paperwork, who have traveled from Britain, who have been denied access. As they try to make their voices heard, the Police are using ever more aggressive tactics to shut them up and deny them access to the conference, pepper spray, batons on shoulders, police dogs – whatever it takes to keep them all at bay. It sounds like a warzone.

The talks have stalled, with too many countries making ‘tiny concessions, and too large demands’ (this is all about money in the end of the day) and as the heads of government are brought together for the last two days, to try to bring the conference to a result, the authorities are finding the people who believe idealistically in the Global Warming CO2 story are proving an inconvenience, and they don’t mind how they keep them out either.

The best report I have found is an audio report from The Guardian’s John Vidal, which gives a good picture as to what is happening on the ground in Copenhagen, and the feeling of shock and alienation from the Climate Constituency as they find that they too are treated as much like the Jews by the Climate NAZIs as the likes of Christopher Monkton and the sceptics.

The day saw thousands of protesters take to the streets to demand a strong deal by Friday but, while they clashed with police, they failed in their objective to enter the conference centre.

Here is the LINK to John Vidal’s audio report.

NEXT DAY – some reports of the violence appear in The Times, as the talks approach a compromise, keeping the world’s new ‘carbon business’ intact, excellent reporting from EUreferendum.