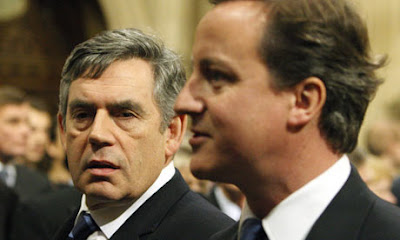 In the last recession, 1991-1992, government revenues fell by 8%, which was not untypical of the 1-2% growth recessions of earlier times.

Where the doomsters might be right, is if the recession indeed does kick into a second leg as soon as the US Congress brings Quantitative Easing programmes to a halt.

If the British recession goes into a second dive of 2-3%, which is quite possible, government revenues might fall possibly another 10% to GBP 450 billion or lower.

As spending in recession at the same time is on a rising trajectory, with a GBP 200 billion gap between revenues and spending opening up this year, the thought does occur that there might be a GBP 300 billion gap to fill in 2010-2011, especially if more banks find that their debtor books have more nasty holes in them.

At some point the whole thing could simply rip apart, and there might be no cash to pay government salaries and pensions.

Just to cheer you all up for Christmas, think of this. Britain would at last lead the world at something. Our erstwhile $2 trillion economy would be borrowing 25% of itself in the coming fiscal year, about double the amount of Greece.

We already lead the world, let alone we might accelerate our lead yet further in the New Year.

“This recovery will be relatively drawn out,” he said. “Credit conditions will remain difficult as the banks slowly nurse themselves back to health, consumer spending will be shaped by the need to rebuild savings, and the public sector will soon have to tighten its belt. All three factors will act as headwinds to growth.”

He doesn’t mention the international situation, where European banks are believed to be nurturing $500 billion bad debts, and the US Congress has had enough of all the endless bail-outs and wants to get tough in future.

Britain would be left high and dry.

Monday’s Telegraph reports that Britain’s banks are no longer graded as they were, but are now regarded as on a level with Portugal, Chile and Austria. The need to sort them out could delay Britain’s recovery. The effect on government finances could indeed be disastrous, as I am saying.

Merry Christmas to one and all!!!

UPDATE – The Economist is the 2009 Christmas Edition confirms Britain as the world’s biggest current year debtor nation at 14.5% of GDP. That is probably an underestimate. The Conservatives’ more responsible attitude to finance will be very necessary as from now. Brown and Darling are showing no signs of getting to grips with this fiscal crisis.

British Banks To Hold Back Recovery.

2 Responses to “Brown Leads The World In Something.”