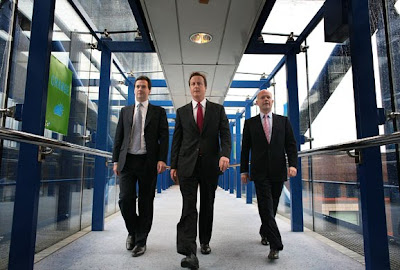 So there it is. There will be no Conservative referendum. But there will be a manifesto commitment to renegotiate. What does that mean? That’s the problem. No one can know at this stage what events will trigger, or where the conflict will come. But at some point, there will be a national outcry, not just a eurosceptic outcry. It is then that Cameron should deploy his forces to wrest power away from the EU.

There is severe displeasure at this in blog comments on http://www.eureferendum.blogspot.com

The primary complaint is that there is an impossibility in achieving anything from renegotiation without an IGC being called. As Lisbon means the end of IGCs, any manifesto commitment to renegotiate would be impossible.

That said, so would there be an equal measure of impossibility if a referendum demanded a renegotiation.

There is a second level of impossibility however. Cameron’s domestic programme of local democracy and Hague’s foreign policy of benign nationalism, are also impossible without the ‘Big Brother’ (e)issue being resolved.

This is merely battle delayed, not cancelled.

General Cameron will pick a different battlefield at a time of his choosing before committing his troops.

Britain is not the only country challenging the effects of Lisbon, with the German Constitutional Court indicating that in certain cases it, and not the ECJ will have the final say.

The Lisbon opportunity is slipping away. The history of the collapse of EU power will take another course. The ship sails on, but so too are the ice floes increasing. There is a political accident waiting to happen, of massive proportions. But events must dictate political moves, not the other way around.

UKIP’s position is for an EU Referendum In or Out. That might well bring the wrong answer. Then what will UKIP do? Get real, lads. Farage is talking nonsense. Cameron is playing it right.

AND From Witan on PB –

The Lisbon treaty does make provision for a government to seek changes and lays down a procedure. The idea that Lisbon is the end, is not true.

The quickest way, however, will be demanding opt outs via the accession treaty though, which is where Ireland and the Czechs will get theirs.

One Response to “So There It Is. There Will Be No Conservative Referendum.”