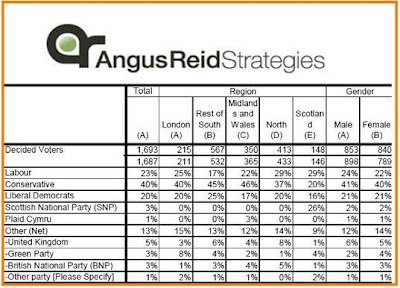 The recent MORI Poll which reduced Cameron’s majority to 6%, and gave Labour a large London majority, based on views expressed by a mere 63 people, was heavily criticised on Political Betting. This poll was not only of dubious authenticity, but it was used far and wide across all media to further the cause of pushing the ‘Hung Parliament’ narrative.

This narrative started amongst Conservative europhiles, with first Michael Heseltine mentioning it as a possibility on BBC Hard Talk, and then Ken Clarke joining in with a ‘Hung Parliament’ comment during an interview. It stood out a mile as all polls until that moment had predicted a Cameron lead of up to 18%, or down to 12%. How, one thought, could a Hung Parliament possibly be calculated from these projected voting figures?

I wrote that it could only be a matter of time before a poll was ‘produced’ lending credence to the Hung parliament narrative, or the whole thing would start looking ludicrous. The moment I saw the MORI poll, as if created to perfection just to fulfil this requirement, I immediately commented to this effect in various locations including on Political Betting. The other commenters reacted strongly to what I was saying, some agreeing, some not, but all taking note in one form or another.

Mike Smithson had by chance commissioned his own poll with Angus Read Strategies, a Canadian pollster with no previous afiliations to UK media. When this poll, which took place in the same week as MORI gave Cameron not a 6% lead but an 18% lead, the Political Betting site was filled with comments, that there must be some kind of relationship between the narrative requirements of the media, and the outcome of supposedly objective polling. The seeds of suspicion had been sown.

The urgent need of the narrationists was then to undermine the credibility of Mike Smithson, his Political Betting site, and his new pollster. In the past, Smithson had come very close to expressing suspicion that some byelection results looked decidedly odd, such as and especially the one in Glenrothes, where the Register had disappeared.

Others, like me, for example, pull no punches in our views as to what is happening. From the evidence we have, it seems entirely possible that Elections in Britain are being rigged on a regular basis, and possibly even the results of General Elections, of which, the Election in 2005, was heavily affected by postal vote harvesting in marginal seats.

What the narrationists cannot tolerate is a change in the awareness of the British public about this. They are used to coordinating news stories, poll results and elections to bring about the results they desire without any comment or interference from anyone, at all times, keeping an EU-compliant Prime Minister in power.

In many countries around the world such as the Philippines where I have lived for the last three years, the public know very well that their elections are rigged to order, with President Gloria Macapagal even being asked by a member of her staff how big a majority she would like, in a recorded and widely distributed telephone call (The notorious ‘Hello Garci’ Tape). Here they just shrug their shoulders.

But in Britain people have no idea what is going on, and all serious political commentators are worried about stating any doubts if they have them, as they would be ridiculed, with most people unable to believe that things have come to such a pass.

So people like Mike Smithson, who occasionally expresses his doubts and is obviously nosing around the issue by hiring his own previously untainted pollster, become a target.

It is no surprise that today he sees that he has been made the victim of what he calls ‘an elaborate hoax’ where he was tricked into believing that a new poll gave Cameron a big lead. He duly publicised the news, not suspecting he was being set up for a fall, which was intended to undermine his credibility and that of the new pollster he has hired, Angus Read Strategies.

This is yet more evidence, not of Mike Smithson’s lack of skill as a commentator on voting patterns, but evidence that the narrationists plan to rig the election, to win it with a Hung Parliament, neutralising Cameron’s repatriation of powers programme, and that they expect to get away with it. Smithson is being warned.

In the end people will have to decide what they prefer – to avoid the ridicule of stating their doubts as to the authenticity of British election results – or to start talking openly about their doubts and suspicions, and get something down.

The British public are a million miles from being able to take this in, but the regulars down at www.politicalbetting.com, who live and breathe polling and election results must surely be able to make the leap, especially now their site is being hoaxed by the narrationists in order to discredit its contents.

FROM Angus Read Strategies Website comes some interesting advice about predicting the results of elections, as follows –

Political choices are like most purchasing decisions—they are largely driven by emotional reactions and connections. In this case study we look at Party leaders in pre-election 2008. We measure reactions to the leaders using Plutchik’s model of emotions.

Stick to your guns, Mike. Don’t surrender any turf to the narrationists.

The first whiff of gunpowder in your nostrils demonstrates that you are really onto something in trying to improve the performance of British media pollsters. In politics you judge your success purely in how much anger you generate. Sadly. And Mike, Boy are you pissing these people off!!!!! Keep it up, mate!!!

Do not under any circumstances back down. This is seriously important stuff that you are right in the middle of. This kind of attack is designed to get you to doubt yourself. Don’t let it. Keep observing, doubting, expressing your instinctive reaction to the information you see. Good Luck. Your decision to hire Angus Read Srrategies right at the beginning of the biggest election rigging exercise in British history could be the best call of your career. Stick with it.

And by the way, who is the person behind the creation of the Hung Parliament narrative, someone with enough power to call up compliant editorial, ‘outlier’ opinion polls, fixed by elections and be sufficiently able to plan hoaxes and other stunts to undermine opposition to his will? Might it be this man? 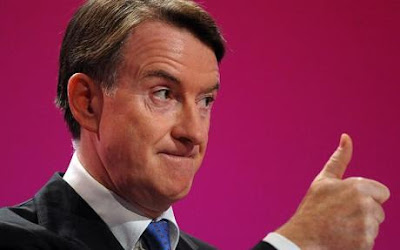 I suppose the big question about the First Secretary of State is the same as the question about New Labour itself. Has he driven forward the necessary task of modernising and moderating a party that desperately needed to be able once again to run the country? Or has he pushed our public life into a culture of chicanery, political lies and the circumvention of parliamentary democracy? The answer is, both.

If the cap fits, wear it.