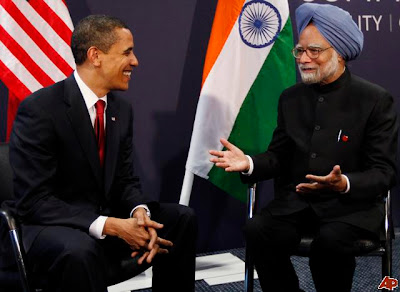 There has been so much bad press issued on behalf of President Obama of late that it is nice and reassuring to see some real progress made on the international front. The Afghanistan situation is not going to go away, and the USA needs reliable allies. Britain and the EU have proved shaky in that regard to say the least.

Pakistan has started work on tackling its internal terrorist problem belatedly, and it appears that relations with the US have improved in that department since Bush went. But now India is expressing strong support for President Obama in his efforts to bring affairs in Afghanistan to a successful conclusion.

Mr Singh, 77, who will hold talks with the US president in the White House on Tuesday morning and was the guest of honour on Monday night at the first state dinner since Mr Obama took office, also dropped clear hints that India would qualify as a more natural “strategic partner” for the US than China.

Mr Obama, who visited China last week, sought but failed to secure material pledges of support from Beijing for a forthcoming increase in US troops, trainers and civilian aid workers in Afghanistan. Mr Singh offered a strong rhetorical endorsement of the US goals in Afghanistan.

“It is vitally important that all major regional and international players put their weight behind the government of Afghanistan,” Mr Singh told the Council on Foreign Relations. “This is the only way Afghanistan can meet the daunting challenges it faces.”

The Indian prime minister‘s words were also directed at Pakistan, which has long been at loggerheads with Hamid Karzai’s government. Mr Singh made it plain that India’s democratic values made it a more suitable global partner for the US than others.

This is a big change in the global picture. India was traditionally a Russian ally. But India has grown to the point where she could become a significant regional power broker, aiding the US effort in Afghanistan. The power vacuum in Central Asia left over by Russian withdrawal is gradually filling, and thankfully could now do so with virtuous powers.

Obama might yet be the great peace-making President, which some have claimed him to be, a little prematurely.