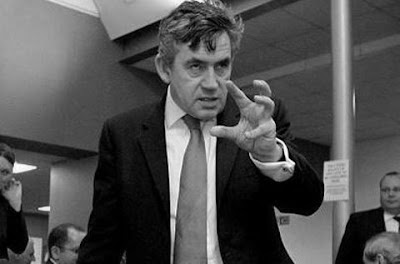 With news that the GE might be called to take place earlier than previously thought, before Budget Day, possibly on March 25th, I had the following thoughts to offer on CH.

Damn. I just arranged with my company to come back to the UK in April. Could Gordon Brown possibly reconsider?

Mind you Cameron can get at the Finances two months earlier. OK. Yes. That is more important.

At first he was described as Labour’s answer to Stalin.

Then Vince Cable realised he was more like the selfish and incompetent Mr Bean.

This was followed later by comparison to tragedy incorporated, Heathcliff from Wuthering Heights.

But now, amidst the dying embers of his regime, it’s 1945 all over again. Britler is back in his bunker. With Tory artillery landing on the roof, he’s determined to destroy the ungrateful country that failed him.

General Cameron’s tanks have reached the Thames Embankment. The Failure’s preparing suicide pills for Mandelson and Milband, as he reaches for his revolver.