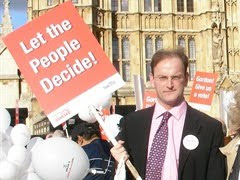 While David Cameron talks of renegotiating repatriation of powers from the EU, one of his MPs thinks there is another way. Douglas Carswell who brought the motion to expel Michael Martin as Speaker, is starting a new initiative. He is one of the few remaining MPs who still believes in Parliament. He is young (relatively), incorruptible and will not back down.

Even with only one activist MP in Parliament, who operates beyond the system of media corruption, there is a chance that a political movement could be born from the back benches. With the Front Bench so hopelessly compromised, where else could the democratic revival of Britain come from?

Carswell could maybe persuade other MPs to join him in his campaign. It would be tantamount to creating a political party within a party, if he did. If Labour’s vote collapses to 120, giving Cameron 450 seats, the only real opposition might become internal opposition.

The Party would not fracture, but it might provide its own opposition, forcing Cameron to hold a referendum to quell rebellion. Eurosceptics should be voting in as many COnservative MPs as they can.

Meanwhile, PA reports that Conservative MP Douglas Carswell has sent an email to his constituents in which he wrote, “I want you to know that I have begun a campaign for a referendum on the EU.

All three parties promised us a referendum. Yet somehow it hasn’t happened. I think that’s wrong.” He told his constituents it was “time to let the British people have their say…No one in Britain under the age of 52 has had the chance to vote in a referendum on Europe. For years it has been left to professional politicians and diplomats to decide EU policy. I believe it is now time to let the people have their say.”

The referendum would need to be timed to a period when a majority of Britos want to quit the EU, which could still be three years away.

7 Responses to “The Future Course Of Politics Takes Shape.”