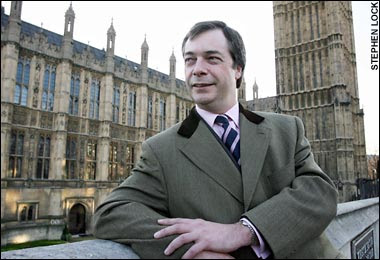 Farage is trying to raise capital out of the latest Conservative EU policy statement given by Cameron on Thursday. Writing in The Guardian, he expands his argument thus –

The Dutch said: “There is more chance of a snowball surviving hell than the EU restarting debates on treaty change.”

The Poles said: “Without having Brussels and other European capitals on side, London will be marginalised.”

The Spanish likewise: “I do not know of a single country in Europe that now thinks we should be spending any time to change the treaty we have just spent eight years negotiating. It is really, really impossible.”

My old sparring partner, Dick Roche, in Ireland points out: “There is a complete aversion across Europe to the idea of going through the kind of process we have just gone through for the last 10 years.”

And the French in their characteristically brusque way have said that “it is out of the question that there would be any renegotiations”.

Fat chance Dave. And you know it.

But Nigel, it’s much simpler than that. To the word ‘NO’ there is no argument or negotiation offered or required. It’s the language of non-recognition, non-obedience, non-compliance, call it what you will. Cameron is saying ‘NO. I am not playing this game any more.’

He’s not asking or negotiating. He’s telling – something Nigel Farage cannot yet fathom. Here is a eurosceptic Conservative Prime Minister-to be, getting ready to say what he wants to happen, and who doesn’t recognise the moral or democratic legitimacy of the EU as it applies to Britain.

The Germans are strangely silent. The one comment from a Die Welt journalist speaking on Newsnight was that many people in Germany feel that Cameron is expressing exactly what they feel about the EU. It’s gone too far and has to stop.

Now Nigel Farage, you didn’t mention that side of the conversation, did you!!!

PICTURE – Farage outside the institution that, this week, has banned him and all other MEPs from having passes. Will he soon walk inside as an elected representative?

Maybe he will, but his old anti-Conservative lines are ageing fast in the new era of Conservative open EU-disobedience. He will need to find a new angle of attack as the Lisbon Treaty period, and taking the EU game and its all preposterous self-importance seriously, is passing. The bogeymen are no longer conforming to type. Cameron is incorruptible.

Without the same old easy targets, snake-like Blair, secretive brooding Brown, evil lying Clegg, or merely wimpy old Hague, Farage’s raison d’etre will just fade away. He must be sensing the change and wondering how and where his new lines will come from. The new generation will soon be taking over. For Farage, life will never be the same.

Another politician who cannot fathom Cameron’s approach to the EU is David Miliband.

David Miliband said this morning at the Fabian Conference that they will be campaigning against Cameron on his new EU policy as being either meaningless or dangerous, as it will lead to Britain leaving the EU.