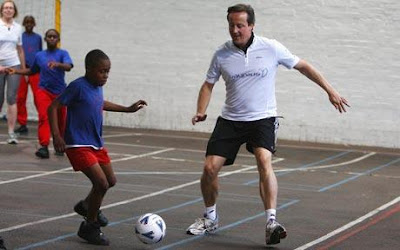 The Eurosceptics in the media are putting up a big moan this week, at the end of the lost ‘Stop The Lisbon Treaty’ game. Cameron is being accused of deception by one and all, failure to keep promises and so on. But really it’s time to grow up, Eurosceptics, and look to the next match. You lost Lisbon 6-0. Now stop blaming the Captain.

He played a good game. He was let down by the Irish Goal-keeper and the Czech striker, but their poor contribution was caused mostly by injury, and disgraceful off-field behaviour of opponents. The Captain did his best.

Of course, it’s disappointing when your team gets stuffed in an important match. But the Season is still going on, and if the moaning attitude doesn’t stop, the team could end up being relegated. There’s still everything to play for.

The problem is that you have an excellent Team Captain, but as he was trained in the West London Upper League, spending time with the Bullingdon Lodge, many of the solid team-supporters from around the regions can’t quite get what he’s on about.

Allow me fill in the gaps in what Cameron is saying, for you.

‘You guys can start pulling the wall down, and I won’t send in the cops or the army. The judges will be overridden by the Sovereignty of Parliament, or other pressures we can deploy.

If the Feds send in the cops or the army from over there, the political consequences would be big enough to bring a majority referendum for out.

Now come on, Fellas. Play your part of the game. And stop yer moaning. This is the big EUSSR match we’ve been talking about a long time. We know how to deal with USSRs. We sorted one of those not all that long ago. The best tactic is to take apart their defensive wall, by getting their excessive number coaches all falling out with each other.

The match team talk will be delayed until after the supporters have chosen the new manager and directors. The last ones have unfortunately bankrupted the Club. Don’t worry, we have backers from City. Later this year, betting on The Metric League Cup is expected to swing heavily in favour of the Martyrs. Chin up, Lads, and get back to work.’

6 Responses to “Eurosceptics Plan Their Next Match”