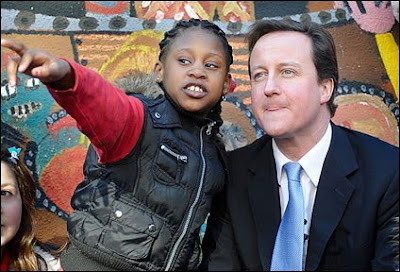 Since Cameron opened up his anti-Lisbon front, the Hung Parliament threat has been manufactured out of the blue. Polls are being rigged. Byelections too, to create the narrative.

With Cameron 15% ahead in reputable polls, the manipulators are now so confident that they get election results delivered on demand that they have decided to create a Hung Parliament to stop Cameron from taking on the Lisbon Treaty through renegotiation.

The extraordinary thing is to see commentators reacting as if all this is entirely normal. In a way it is. No one gives a shit about the whole situation, because they cannot understand it. Cameron will be sent packing. Britain will be in the Euro withing two years and no Conservative government will be permitted to win an election ever again.

We are ruled through deception and manipulation.

Until people wake up and realise what is happening, they will get away with it.

Cameron is over before he’s even started. If only UKIP, BNP and the Greens could see how they are being used, but they are more interested in their own little games than the big picture.

The way to fight back is to explain to people that expectations are being manipulated to make the coming rigging of the general election appear to be as if normal, producing the ‘éxpected’ result.

Here is the MSM game explained. – This is all total bollocks.

4 Responses to “Eurosceptic Cameron Is Dismissed”