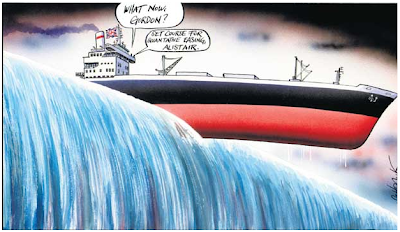 Yesterday the news of a major default by a government-owned Dubai fund of $3 billion sent shockwaves around the financial world. Strangely, shortly after the event was publicised, and shares were tumbling, the London Stock Exchange trading system and screens went down, and were out for nearly four hours, stopping all trades for much of the day, until the US markets were open.

The same thing also happened last September when the London closedown lasted the whole of a Monday. That coincidentally was the weekend that Fannie Mae and Freddie Mac were announced as being effectively insolvent, requiring intervention by the US government, and shares might otherwise have been hit by panic selling.

I wonder if the UK government secretly has the powers to ‘pull the plug’ on the markets while it races around to assure all parties not to panic.

Problems have happened before, but never on a day like this when the market was coming to terms with the enormous Fannie Mae and Freddie Mac news from over the weekend,” said Andy Stewart, chief executive of Cenkos Securities.

In either event, the markets are still holding for now. But what if a couple more countries like Dubai were to default? The vast quantitative easing programme which Gordon Brown claims is saving the world by driving up asset prices in the fastest rising asset bubble in history, might suddenly burst. Governments might suddenly find that the mass lending to banks and governments to stem the tide of debt default is running out of support. Then what would he do?

Maybe it would be time to face the real music, and accept that the world’s debts have got to be unwound, and that Britain, for example, will not be able to issue endless gilts assuming future generations will buy them. Cuts might be cash-driven, all of a sudden, and no longer a political decision.

Rule by Gordon Brown’s cheque book, which has splurged trillions across the planet for over a decade, would suddenly be over. The punch bowl would be gone, and the largest hangover in history would begin.

No wonder he’s so quick to react to any signs of panic.

He is just hoping his luck will hold til March 2010, the likely election date, of course. As for the poor London stock market, its reputation as a reliable trading platform is being dragged down to New Labour levels of non-performance. Compared to Brown’s chances of re-election or his chances of pulling off a Hung Parliament, the future of London as the world’s premier financial centre must seem, relatively of miniscule significance.

Fraser Nelson in The Spectator sees parallels with Brown’s QE programme and that of Japan’s after its bubble burst. See HERE. The British and American lending was intended to provide fuel for lending to business and consumers. But banks have been unwilling to take on much more lending exposure to these.

The money has ended up being lent to organisations buying securities, or shares in UK-speak. In the US $5-10 billion a day is being lent to securities-buying, boosting the asset markets which otherwise were heading towards depression causing levels. The problem will be when the tap is turned off, or if the debts of countries lending in the coordinated quantitative easing programme, become unsustainable.

Reality will have to be faced at some time. In Brown’s case that will be after the election if his luck holds.