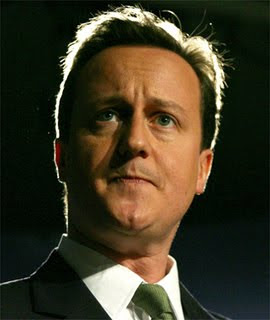 The part of the speech which has been missed by most commentators is that Cameron has extended his promise of a referendum, not only to cover any further Treaties, of which there might not be any or many, but to any substantial transfer of powers from Britain to the EU.

This can even be if those powers are being transferred by extending the ratchet, from unanimity to Qualified Majority Voting. A proposal within the EU to change any heading to QMV could trigger a referendum. There could be a referendum every month.

I jotted down these notes as the BBC broadcast the Cameron speech.

David Blunkett – made of plywood.

Lisbon is ratified. Our campaign is over. Lisbon is incorporated into EU law.

We cannot make the Lisbon Treaty disappear. People will resent the fact that a referendum cannot be held. It is the fault of Blair and Brown. We fought for a referendum. We would have held it had it not been ratified.

Today I will speak directly to the British people. Ho can we salvage something from the mes Labour have left us. And I want to tell the EU what they can expect.

This will never ever let it happen again.

We will amend the European Communities Act 1972, requiring a referendum for any exension of EU power, including the Euro.

Others want a referendum on anything for the sake of it. I don’t think a made-up referendum would work. We will have mandate for a renegotiation after the manifesto.

There is more we can do.

Lisbon allows further powers to be transferred in the future. No need for new treaty. We do not agree that these ratchet clauses can be used. If used, the clauses will be reviewed by Parliament.

Steady and unaccountable intrusion of the eu into every aspect of our lives.

We will want to return the opt-out from social and employment legislation.

We will want an opt-out completely of the Charter Of Fundamental Rights.

We will negotiate an opt-out of the Criminal Justice System. Only British authorities to investigate inside Britain.

We cannot do this unilaterally. We will need the agreement of all 27 member states. This will need complicated legal advice, the expertise of the Foreign Office. It will make a precedent that powers can be returned.

BUT what if we cannot get these guarantees?

We look forward to working with our partners, to entrench stability in the Western Balkans, extend to Turkey, strong and open relations with India and China. A tough settlement, vigilant and tenacious in defending the competitiveness of the City Of London.

Britain’s interests are best served by an association of states. We will watch closely how the Lisbon Treaty pans out.

We need plain speaking. Lies and spin no more – what can we achieve and how are we going to do it.

Question – Where are the boundaries between issues that trigger a referendum, and those that don’t?

Answer – We don’t intend to agree with any ratchet clause. Any turning a shared competence into an exclusive competence would have to be subject to a referendum.

Question. You backed out of Lisbon referendum? Trust?

Answer. Lisbon is now EU Law.. I said I would set out my stall. I am doing it now.

Question – Are you worried about losing votes over this? Is the ultimate court the Supreme Court? If so that is inside the EU.

Answer The 1922 committee backs this platform. These is party unity. The Sovereignty Bill will stop the steady legal drift to European Law. Further details to come.

Question – Are you downgrading your policy on Europe, settling nerves in Brussels.

Question – Guardian – can you give cast iron guarantee that there will be no further reduction in the British rebate. And can you guarantee the Luxembourg compromise about QMV.

Answer – Blair gave away the British rebate for nothing. We want europe budget controlled properly. across a parliament. no six month euro war to achieve it all at once.

q. what will happen to the supreme court? what’s the point of it. Are you trying to leave?

a. stop legal drift into areas that the eu judges have not yet gone. same objectives as the german constitutional court. we need a law as we don’t have a written constitution.

q. will the law be drawn tighter than the judgement of the German Court?

a. we need to put beyond doubt that the final arbiter of issues are British institutions, not EU institutions.

q. economist – you say you don’t want to rush into a bust-up with the EU. What will it be? What concessions? What threats?

a. achieve this across a parliament. We can get guarantees appended to Accession Treaties. Working Time Directive worst impact is hurting maternity units and our Fire Service.

q. practicalities of the supreme court not being supreme. Asserting primacy of UK legislation, why cannot that be retrospective?

a. prosecutions can only be brought by british institutions. a lot of expertise and advice needed.

q. el correro. Inconceivable that a referendum held will be perceived as anything serious in rest of Europe. This is only a volte face, run by domestic issues. Will you in fact be a committed europhile later on like Tony Blair?

a. People will have to accept the status quo.

How much is the promise worth? Is this realistic? Are his ideas meaningful?

National Sovereignty Act guaranteeing British Law is supreme over European Law. Putting that through parliament would be hard for him to negotiate. BBC don’t like it! We will need to see precise details.

FARAGE (reported not read) – deceit from Cameron. not credible. not doable. too little. too late. Vote UKIP.

CARSWELL – (speaking) we need a referendum on our relationship with Europe. EU changed since 1975. MPs promised to have a referendum. Lisbon is self amending. No need for any further Treaty. The Party of localism and direct democracy needs to challenge EU. (did not realise the referendum applies to the ratchet as w
ell as Treaties)

TIM KIRKHOPE – speaking from Brussels – Extremely good for Britain and the Conservative Party.

BBC – how easy will it be to repatriate powers?

KIRKHOPE – we have always been consistent about this. Reasonable to want these things repatriated. We want to make it clear we repatriate sovereignty over its legal position.

4 Responses to “Cameron Does Enough – And More”