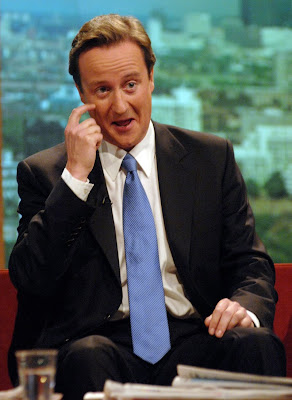 The reaction to Cameron’s speech has been to take it seriously by the EU, and to attack it as insufficient by the Eurosceptics.

It is, in essence, a declaration of non-obedience to the Lisbon Treaty.

It is very similar in spirit, to the statements of many in the blogosphere prior to Lisbon’s final ratificiation. On www.eureferendum.blogspot.com, for example, Richard North coined a phrase – ‘Neither Loyalty Nor Obedience’, which I complimented.

The funny thing is that now Cameron is doing exactly as specified, in similarly expressing a programme of non-obedience to the EU, by challenging Lisbon in the detail, as it cannot be stopped in the main, the eurosceptics are going crazy with frustration and rage, accusing Cameron of selling out.

Bill Cash exploded even before Cameron spoke. Roger Helmer and Dan Hannan had the grace to wait until after the speech, but all of them and many others are sulking because the main Lisbon battle has been lost.

But all these people should realise that the war is not over yet, and assassinating your general will not solve the problem, especially as the general has declared a new battleground. He has not surrendered, as they seem to suggest he has.

What confuses people is that the primary battleground is not in the House of Commons, nor is it so much inside the Party, but in the minds of the public.

The battle is simply to make people realise that they don’t want the EU. But as the media controls the dissemination of all information, and, bar The Sun newspaper and The Express, all are to a greater or lesser extent beholden to, or frightened of, or controlled by the EU, the fight is skewed against us. The primary forum for this battle is the media, and that fact comes first.

The blogs help to some extent, but not really as they create cult-like lakes where the role of the media is not understood, and where rebellion against Cameron can fester. The reason Cameron might win this contest in the end, is that he is of the media. He understands the the terms of the contest, and realises that you approach the target facing sideways, like a crab.

To most bloggers that means he is suspect in itself, but only a media person can hope to fight this war and succeed. It is a media war, and Cameron is proving to be a master of the art. He deserves more support from his own Party at this critical moment, but I fear they don’t understand what is going on, and will hurt themselves by directing fire not against the enemy, but against their colleagues and fellow travellers, who want the EU’s rule of Britain ended immediately.

The opposition are moving quickly to block Cameron, sending Miliband to act as EU Foreign Secretary, and parachuting Mandelson back into the Commons into Miliband’s South Shields seat. Once they see the enemy are on manoeuvres to block Cameron’s Lisbon non-obedience rebellion, maybe the eurosceptics will then realise that the battle has moved on, and rally round their only leader.

It would be tragic if the eurosceptics were defeated not by the EU, but by themselves. They too need to face sideways as they rally to the non-obedience cause. The time for open warfare is over. We are all guerrillas now.

It could be highly entertaining too, sending EU politicians into fits of rage as they cannot understand why we don’t buckle to their commands. They will have to endure death by a thousand Cameron cuts. A quick bullet for the EU might have been preferable to all sides, but hey let’s enjoy what life is sending along instead.

Watch out for that Cameron smile. It’s a lot more deadly than his bite.

Either an IN/OUT referendum could be won or it could not. That is the nub of the matter. All other considerations are son of that.

The electoral system is in tatters with postal voting fraud now commonplace, and ballot box tampering and stuffing getting easier with overnight storage.

Before any vote of any kind can take place, voting in Britain has to be regularised. Cameron’s gone as far as he can pre-a general election, in which he will face fraudulent practices on the grand scale.

You (the referendumists) overestimate your strength as a result. Only once the electoral and voting processes are put back together, can any vote take place. Without a vote or referendum, Britain will not leave the EU.

1. Cameron has to win the GE
2. He has to regularise postal voting and ballot box storage and management.
3. He has to prepare the electorate.
4. He can then hold a referendum.

Now that will take not 6 months, but maybe longer, like up to 6 years. Then we will win. All he has done today is set out the future direction for the game. Please relax everybody. Politics is not science, engineering or mathematical calculation. Neither is it law, as in the final analysis law is subservient. Politics is an art, and Cameron is a fair artist.

One Response to “Cameron To Have Last Laugh On Lisbon”