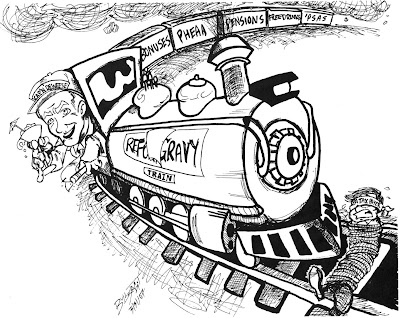 Firstly, from everyone in Cóir, thank you from the bottom of our hearts for the magnificent effort you put into making the second battle against Lisbon such a truly inspired campaign. You’ve been a brilliant, wonderful team. God Bless you all. We’ll be sending a full report later this week.

This is a grubby win for the elite, driven by fear and bullying.

In the three days before the vote, the people were subjected to a media onslaught of Yes propaganda threatening ruin and isolation if people voted No. It was unprecedented and utterly disgusting.

We succeeded, however, in raising several crucial issues, including, of course, the right to life, and the increased profile given to those issues in Lisbon 1 and 2 will make a big difference to our work going forward.

In the next five days we need to make sure that every Cóir poster is taken down or we will face VERY stiff fines that we can’t pay! Can you ensure that EVERY poster you put up is taken down please? If you see a poster which you can’t take down please call us on ………

This so reminds me of the propaganda used to crush IDS in the UK, as he tried to stop Blair. Now Ireland is tasting the EU’s propaganda systems.

Cameron has no choice but to back off from Lisbon, and focus on the election. Torysceptics don’t realise the pressures he faces. In the end , the crashing economy will bring down the hated Blairs, and the EU. Ireland should by now have that notion in her mind.

The EU is an economic disaster as well as a political one. But while people still believe in the gravy train, they will keep voting for it. Once they see that the gravy is all gone, they’ll pack up, go home and get back to normality. Poor Ireland. She had her chance.

Meanwhile the debts keep piling up. EU money to the rescue? Hahahahahaha!