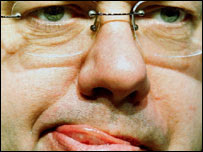 This is getting very dirty.

Many people in Ireland are right to suspect their Taoiseach of planning foul play in order to win this referendum. He has broken every rule in the book during the campaign, and the law has afforded little protection to the NO side with most of their posters getting dragged down, for example.

Now the COIR Campaign asked its activists to get a total of votes cast at each polling station at the end of the day, to see if the final totals checked out with the day’s votes. But the Irish government who are responsible for ‘storing’ the ballot boxes overnight, are threatening anyone who enquires as to the number of votes cast from the presidinging officers, with immediate arrest.

It seems almost certain now that the Poll is going to rigged by ballot box tampering while the boxes are ‘stored’ overnight. This is a shocking development,but not a surprising one given the total disregard for legality displayed by the Irish government throughout the campaign.

Cóir has said that the State has undermined the confidence the electorate can have in the referendum process by threatening citizens with arrest if they proceeded with plans to monitor the vote on the Lisbon Treaty.

“Today we were told by Dublin City Sheriff, Brendan Walsh, that he had asked the Gardaí to take action against any of our volunteers who sought information as to the number of votes cast in a polling station at the end of the day,” said Manus Mac Meanmain of Cóir.

“To say we are shocked is an understatement,” he continued. “In conversation with Cóir, Mr Walsh confirmed that the information being requested by Cóir was compiled by the Presiding officer at each polling centre at the end of the day’s voting in any case.”

“But now he has threatened any citizen who politely requests that information from the Presiding Officer with arrest. This is simply outrageous, and will shatter the faith citizens should be able to have in this referendum process.”

It looks like there will need to be a third referendum now, as the results of this one will be suspect.

UPDATE – More shenanigans – A Fine Gael exit poll was reported by the Irish Times as giving a narrow victory to the YES side, 52% to 48%. But the same poll was reported on Irish TV, RTE channel, as 60% to 40%.

UPDATE 2 – You couldn’t make this up ! The Irish Times has altered its first report to match RTE’s! Both now give 60 to 40%. That’s an awful lot of ballot box stuffing to do, but they’ve had all night to do it. If Biffo’s ordered 60/40, I guess 60/40 is what he’ll get. They could have written out the votes ages ago, of course.

UPDATE 3 – As the results roll in, it looks like Biffo got the result he ordered. Next time he’s rigging a poll, he should make sure Fine Gael are kept informed of the amount of rigging required. They very nearly gave the game away – or maybe they did.

Was the election rigged? I would say there is prima facie evidence of a plan to stop any serious monitoring of the vote. Why would that be happening? And the poll from Fin Gael also indicates that the results are miles away from informal polling taken on the day. My money says ‘rigged’.

As Jo Stalin said, it’s not who votes that counts, but who counts the votes.

(Biffo is The Taoiseach Brian Cowen – Pictured at top)

One Response to “Irish Police Threaten Referendum Monitors To Back Off”