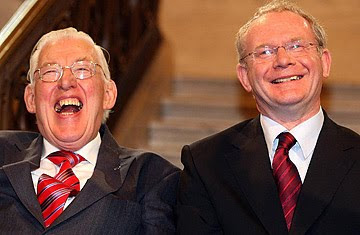 The Northern Ireland Assembly passed a motion demanding a referendum on the Lisbon Treaty by an overwhelming majority 47-19. The news was scarcely commented on in the British media. It should have been. Not only because the Lisbon Treaty will soon be facing a new threat in the UK, once Cameron is elected Prime Minister, enjoying cross party support, but because at last, Protestant and Catholic enemies of old are joining in a common cause, to fight for Irish and British freedom, against the Lisbon Treaty.

The situation is best explained, not by the DUP or Sinn Fein, but by a speaker who opposed the motion, A Maginness. Here is an extract of his long contribution to the deabte that took place.

It is no surprise that Sinn Féin and the DUP have a common cause on the European Union in the House today. It is sad that two major parties are at one in their anti-Europe stance. It is bad for society, and something that I deeply regret. It is bad for our community to send a Euro-sceptic message to Brussels. Parties should reflect deeply on that thought.

Wendy Austin made a pre-referendum visit to Dublin, where she asked a lady in the street how she would vote. She replied that she would vote “No” and then asked what Europe has done for us. Wendy was flabbergasted by the response, because she recognises that the European Union has rebuilt this Republic.

Members’ attitudes reflect that lady’s opinion. The European Union has done much to enhance this society and can do a lot more.

Maginess is simply incredulous that the EU can be criticised. Such is the situation with all the (e)utopians. They only see (e)perfection, which is why they are so dangerous. The Lisbon Treaty, however, must be congratulated. What other issue could bring Dr Ian Paisely and Martin MacGuinness onto the same side? Isn’t it good to see the old bruisers chumming up together?!!!

Here is the full debate.

This is the decision reached by the debate –

The eGov monitor reports that the Northern Ireland Assembly voted for a motion on Tuesday by 47-19 in favour of the UK holding a referendum on the Lisbon Treaty, and calling on “those parties aspiring to form the incoming Government of the United Kingdom to give an unequivocal commitment to hold, within a twelve month period from assuming office in 2010, a binding referendum on the Lisbon Treaty that is unconditional and unrelated to how other member states choose to vote, and the result of which will not be held in abeyance pending a further referendum on the subject.”