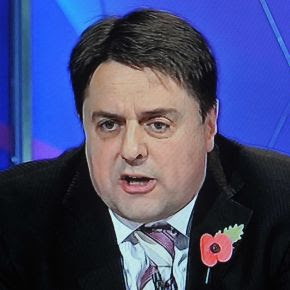 The Nick Griffin question time happened, and it was about as expected. The ‘good people’ were lined up to assault Griffin for his past statements, his past associations and his assumed beliefs. While these were all eminently attackable, the result was that no one was able to hear much of what he was saying, and so form an independent assessment of who he is and what he represents.

In truth the BNP are making miniscule progress in Britain, gaining about 3% of those who intend to vote in a GE as supporters, which means only 1.5% of the adult British population would vote for the BNP in a GE, and about 3% in the European elections.

The way the BNP was received by the BBC you would think that they were on about 10% at least, and potentially on a breakthrough. They are not.

The BNP supporter is the little guy, who is terrified of losing what little he has, so any identifiable threat to him or her, is seen as something which needs to be assaulted.

The little guy is used to losing, being edged out and shouted down, and the way to reinforce those beliefs is to publicly demonstrate to him that he is going to continue to be shouted down, and never listened to.

It was laughable to see Griffin trying to say that he had once sat on a panel with a Ku Klux Klan member, who, he claimed, was not involved in racism. Many of his former and current statements were verging on the ludicrous. He should have been allowed to flow a lot more, as once he speaks, the first soundbite of most of his policies cannot cope with more detailed examination.

Once he was questioned on details, he started to fall apart pretty quickly. But he was able a few times to get the sound-bite out, which was followed by an immediate overreaction and long statements from each of the panel.

He should have been allowed to explain exactly what he means, as in truth, he has a lot less substance in his thinking than first appears. Who, are the ‘indigenous British’ exactly?

He had many good points too, about immigration being out of control, and about primary school children receiving sex education, being far too early. But as he was presented as an all-round bad guy, the points he did have, were missed and not given enough discussion.

The room was packed with people who wanted to angrily assault Griffin, when in fact, most people can quickly see for themselves that half of what Griffin says is barmy and nasty, with a few elements of sense mixed in. The majority of Brits don’t buy him, without the need to hear his opponents given the floor before he has had a chance to put across his viewpoint.

The coloured lady who runs the British Museum handled him and the topic the best, saying that she knew that British people in general were too sensible to back this kind of politics, but had the Chair enabled Griffin’s valid points to get across, with less total demonisation, the show would have done more for democracy.

There’s no point in putting the guy on TV if once he’s there, he’s treated like a leper. It will only build his support yet further, as his supporters can see that he is not being given a fair hearing.

And any way, why are Primary School kids being given sex education in Britain? There is much that the current system of government is getting wrong, and is not being properly opposed. Griffin could be made useful, and selectively listened to, without his more racist and divisive cultural ideas given the time of day. As the wise old birds used to say in our village, you can learn from a fool.

The BBC appeared arrogant and of a closed mind, not Griffin, who was polite and courteous. Griffin was crushed by the BBC, but it did the BBC little credit for having done so. I think we can expect more images of Spitfires and dogfights coming in the months ahead, as the BNP exploits the fear of its own members, and even more so the knee-jerk overreaction of its opponents.

This felt like round one. Griffin will need more intelligent handling in future. Allowing him to hang himself, with more of his barmy statements is the way to go, not ensuring he cannot get a word in. And the world needs to concede points to him when he is right. Otherwise the evil he represents will be strengthened, as he can claim he is not being listened to.

Fortunately for the BBC, Griffin cannot yet tell which are his strongest and which are his stupidest statements. It’s all jumbled up together. If he had managed to get one of his good points to really run, he could have turned the meeting around. He is, in the end, the little guy who doesn’t quite get it right, just like his supporters. The BBC should relax more next time, and believe that, as ever, the truth will out.