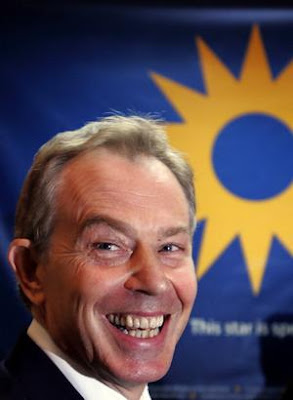 A number of people are rotting in jail. Barry George spent years behind bars. Others have had their lives ruined. All in the cause of hiding the truth about Jill Dando’s murder.

The man the authorities are protecting is Blair. He ordered and openly supported the bombing of RTS the Belgrade TV Station in April 1999, which was immediately followed by the professional killing of Jill Dando in retaliation.

The nation was terribly shocked, and Blair wanted the real reason for her killing never to come to light.

Many are still paying the price for saving Blair’s face.

The problem with Blair wanting the EU Presidency, is that there are simply too many bodies buried, and too much lying.

Isn’t it time for that smile to be wiped from his face?

If Blair becomes President, how many more lives will find their way onto the expendable list? Do we really need to go through it all again? Once was well enough.

Did Blair Buy The EU Presidency With British Taxpayers’ Money