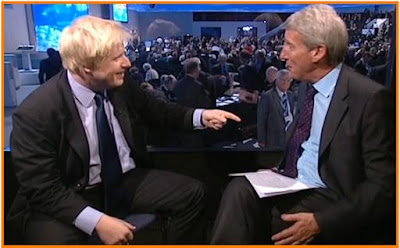 (after Boris had allegedly chucked a flower pot through the window)

as a mere Mayor Of London, not an EU lawyer, I admit, it may be difficult to have a referendum, once it is done and dusted.

Can you ask the people to vote? I don’t know the answer to that.

Paxman – You’re not talking about the real world Boris.

Boris – even in your world, it is possible the treaty might not be ratified.

Paxman – you’ve drunk chmpagne with him

Boris – People do know what he stands for

Paxman – what was he like in the Bullingdon Club

Paxman – did he throw flower pots through windows?

he will do more to tackle hardship, than Labour

Paxman he never spent the nights in the cells like you

Boris the details of that night escape me mercifully

are these the depths you interviewers you have sunk to

why don’t you get a proper job?

Boris how much do you earn?

Paxman i should ask the questions

he’s a first rate guy. a fatastic committed guy who’ll be a great prime minister. get out there and vote for him in may. etc etc

THOUGHTS – what makes Boris impenetrable to interviewers is his honesty and simplicity. He says ‘I don’t know’ when he doesn’t know, but he says eloquently and forcefully what he knows to be right.

He is bright enough to know when to be candid, and admit he’s no idea about sopmething, but still give a strong view about it, working from main principles.

It’s very similar to Dan Hannan in that way.

Honesty is the one thing interviewers have no idea how to cope with. Their whole approach to politicians is ‘you’re lying really, aren’t you’ deserving the Paxman weary sneer. But if Hannan and Boris stick to talking about beliefs and strongly held views, the interviewers have nowehere to go.

They are so used to the Labour approach of – we make the narrative. you have to believe us because we’re in power, that they have no way to cope with completely straight replies.

As a drama it was nothing much, compared to the billing around the web, which makes it sound like a big punch up which it wasn’t. Though as an expose of how truth cuts through bullshit, it was an ’emperor has no clothes’ moment. Paxman was naked.

But even he seemed to be very relaxed that Boris was being totally truthful, leaving him absolutely no angle.

Paxman will no doubt be rapped for giving in to Boris charm. But the charm would not work without his being totally candid.

It’s why Boris is good with money. Honesty is so much cheaper to fund that bullshit. You could feel your taxes coming down, and people getting looked after better. Boris would be able to get rid of all the bureaucrats and keep the front line services. His speech to conference was much funnier and more informative in that way.

Comments
You can follow this conversation by subscribing to the comment feed for this post.
Boris seems to forget that under the first eight years of the last Tory Government which promised to cut taxes the upper rate of income tax was sixty percent. It didn’t stop Mrs Thatcher boasting about her short-lived economic miracle before the bubbble burst and she was thrown out by her own party.
Posted by: Fred Hall | 05/10/2009 at 01:12 PM

It’s time for change, folks …
Yes, it’s time for a change to the voting system. At the next general election the majority of the electorate won’t be voting Conservative – yet we’ll be stuck with a Conservative government for 5 years.
Posted by: Robert | 05/10/2009 at 02:55 PM

I can’t believe this rubbish. Do people take this guy seriously, or is he just the warm-up comic? Launching an air quality strategy – will that be before or after he pays the £300m fine for the level of London’s pollution thanks to his policies. The number of unemployed under the last Tory government was cataclysmic, 4m plus when they left office, and that doesn’t include those on Mrs Thatcher’s big idea, Incapacity Benefit. We had 2 recessions under the Tories, one in the 80s, and another in the 90s. Annus horribilis, 18 of them. I see the polls in this paper show that two thirds of those polled say they don’t trust David Cameron. Two thirds of those polled wouldn’t want Boris Johnson as Prime Minister. Says it all, doesn’t it.
Posted by: Val Daniels | 05/10/2009 at 03:49 PM