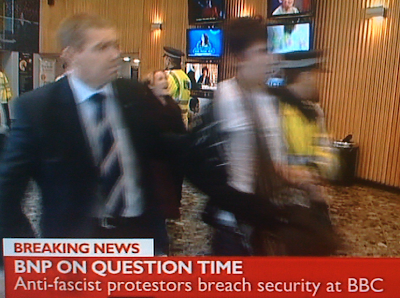 If this is a serious riot, then BBC Gardener’s Question Time is war. The numbers of cameras and journalists outnumbered the rioters three to one, and the Police were strangely absent from the BBC gate as it somehow opened itself. This is theatre, staged for consumption by the world’s media. Why?

The BBC is heavily ‘influenced’ by the EU, and funded by them. They are well capable of organising demonstrations and events to order, especially when there is a subject they are keen to propagate.

And the current concern of the EU, it seems, is Britain drifting towards making a serious challenge to the Lisbon Treaty. Hillary Clinton is today challenging William Hague about that very topic, placing it at the top of her agenda. While all the previous week has been taken up with accusations against David Cameron by David Miliband, the Foreign Secretary, trying to get leverage over him by alleging he is associated with dubious politicians in the ECR.

The EU is trying to ramp up fear that extremism is on the march on all sides, and that only their Federal Lisbon system of ruling Europe will suppress the extremists. They seem so convinced that this tactic will work that, in the House Of Commons, the Conservatives were yesterday effectively accused of sympathy with the holocaust, while all media interviews have tried to corner Hague and Cameron in similar vein. Now the BBC wants a bit of street theatre to provide a backdrop, against which their Lisbon credentials can be seen to shine, and Brits can have a change of heart.

The trouble is that no one is that bothered. The BNP rustled up a mere 1 million votes in the EP elections in June, after decades of campaigning. They poll at 3% of the national vote for the general election, and while some of their beliefs are none too friendly to different races and religions, most people in Britain are still as phlegmatic and tolerant as ever they were, fed up with excessive immigration, and the high rate of crime, certainly but almost totally disinterested in political extremism as a way to deal with it. A return to our traditional democracy would do.

The Conservatives are riding high, with mild-mannered leadership, and all attempts by the EU to build up a narrative of violent, extremist Britain turning away from (e)utopianism look and sound plain daft. Our dislike of the EU and of the decline in our democracy are deep-seated and have been growing over thirty five years. It will take more than suddenly creating an atmosphere of false extremism to turn that around.