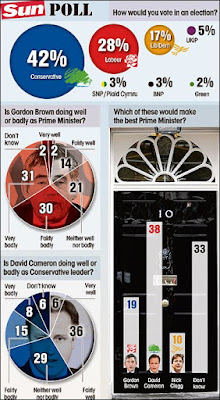 This SUN article misses the point entirely. Cameron’s 42% is writ large and is said to be enough to win him near 100 seat majority. But look again. Do you see the tiny circle giving 5% to UKIP? This could be hugely significant. UKIP are guaranteed high exposure prior to a General Election, as the BBC knows that more UKIP votes escape from the Tories than Labour. If the UKIP votes grows any more (It was 2% in 2005), it could be enough to prevent Cameron winning a majority at all.