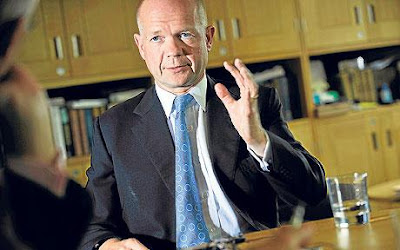 The Telegraph’s article today, carrying the interview with William Hague, Shadow Foreign Secretary, has a misleading and unhelpful title – William Hague on the Lisbon Treaty: the EU question that goes unanswered.

In the interview Hague states what he will do in each of the circumstances that may occur in turn, giving more detail than he had previously, changing the Party’s policy in important details.

There is, as Hague points out, not one answer to ‘what will you do about Lisbon, Mr Hague?’, as the Telegraph seems to demand. There are a minimum of two. One if the Treaty fails to be ratified, and one if it is ratified.

Then there is the question of timing. Is it sensible to declare a policy before knowing which of the various possible circumstances are to come about? And if it is sensible, when will the policy be declared?

All that is clearly far too complicated for the Daily Telegraph to cope with, so an accusation of not answering the question, is made, to keep things nice and simple.

Look at what Hague actually said.

A.1 If the Treaty is fully ratified

If the treaty is ratified before the election, he and the Tory leader will issue an immediate statement setting out the way forward. It is being drafted even now.
When it comes, you will be left in no doubt that we mean business, he says.

B. If the Treaty is not fully ratified

Mr Hague wants proponents of the treaty to accept that ratification before Britain votes (General Election) is no longer the certainty it once was.

The Czech Republic has just launched a constitutional review of the treaty that may take six months at least;

Poland has yet to ratify;

and while a “yes” vote in next week’s Irish referendum seems likely, it is not guaranteed.

Then he adds something else new –

It is for the promoters of the European constitution to say what they would do if at the 11th hour it is killed stone dead by a resounding “no”.

That is a change in emphasis from previous policy, seemingly not noticed by The Telegraph. It was previously stated that if the Treaty is not ratified by the election, and the Conservatives win power, they would simply call an immediate referendum.

Now Hague says that he would wait to see what new proposals are going to be made by the EU.

It is of course going to be more complicated than just holding a referendum in any case – a referendum about what exactly?.

If the Treaty is already acknowledged as dead, why go to the lengths of holding a referendum to unratify a dead Treaty?

Note again that Hague did answer the question.

For the moment Mr Hague has no direction to offer on the questions that remain unanswered: will there be a referendum come what may?

Mr Hague will not answer the question. Until we know the fate of the treaty, it is all too hypothetical…

HAGUE – “We can only have one policy at a time. This is our policy in this situation.

The treaty has not been ratified by all 27 nations and in that situation a Conservative government elected at the next general election will hold as an immediate priority a referendum.

I have asked the Foreign Office to have a referendum bill ready immediately after the election.” A referendum would be held “within a few months”.

So again there is a change in Hague’s answer from his previous statements. ‘immediately’ has become ‘immediate priority’ to happen within ‘a few months’, and that, in any case, a referendum will depend on what if any new proposals the EU will make.

If the EU has not acknowledged that Lisbon is dead, and is still attempting a full ratification, then Hague sounds as if he would hold a referendum to undo Britain’s ratification. But it’s complicated. The EU might simply park the Treaty, and the Lisbon battle is over, so there would be no need to have a referendum anyway.

Ireland votes next Friday, days before the Tory conference opens in Manchester. “It is important to be clear. As we can only have one policy at a time, there will be no new announcement, no departure from that in Manchester, whatever the result of the Irish referendum.”

What is evident is that he is unable to give a clear commitment that we will get a referendum, come what may. Whichever way you package the question, he bats it away.

A.2. If in the coming months all other obstacles are cleared and the treaty comes into force, Mr Cameron will not wait any longer. “We would set out what we would do in that contingency and it would be in our manifesto to seek a mandate for it.

That sounds clear enough and is an answer, which goes well beyond the previous form of words which were – we would not let matters rest there.

Is the Telegraph really as muddled as it likes to appear, or just trying to cast the Conservatives in a poor light?

The media’s game generally is undoubtedly to promote UKIP as an alternative to the Conservatives and pull Cameron’s vote down. By sheer coincidence, advertised on the same page as Hague’s interview is another interview, but this time with UKIP’s Nigel Farage MEP, titled ‘It’s Our Country. Let’s Run It’.

There are no awkward questions placed with Nigel Farage such as his membership of the Federalist Freedom & Democracy Group in the EP, or about his Federalist UKIP South East MEP colleague Marta Andreasen, or his £2 million unaccounted for EU expenses. There seems to be a lack of even handedness breaking out in this newspaper, worthy of the BBC.

It looks like the Telegraph will be Ukipping all the way to the General Election.

They will allow them to appear to be withdrawalists, without asking any detailed questions at all. As for Hague, let’s face it. The one thing he does do with questions is answer them and very intelligently too. The problem is only that the media don’t want to listen carefully to his answers, and has other agendas.

8 Responses to “Conservatives Will Rebel Against Ratified Lisbon”