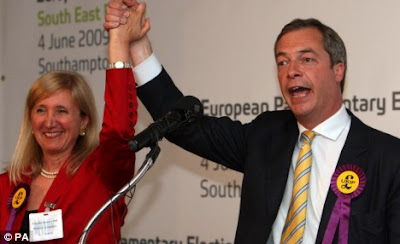 The only part of this story that everyone agrees on is that the UKIP Treasurer, formerly the EU’s Head Accountant, Marta Andreasen, and the Party Leader Nigel Farage have both resigned from their roles within UKIP a few days apart from each other. That’s where clarity ends.

Such a coincidence of resignations, one at Party Conference and one just after, arouses curiosity naturally enough. But when the Treasurer’s reasons for resigning are denied by Nigel Farage, suspicion is increased that someone might be hiding something. What exactly is going on?

When Andreasen was asked why she was resigning, she stated, as published in today’s Times that she objected to the way that money was being wasted, and being handed to friends of the Chairman, beyond the operational rules of the Party. It was a pretty serious allegation, which The Times replicated in its report.

The BBC, on the other hand, keen as always to present UKIP as whiter than white, or rather as unracist and uncorrupt as it can, (as UKIP takes votes from David Cameron and the Conservatives) tells a completely different story.

Mr Farage told the BBC he had not expected “Marta to stay on very long as party treasurer anyway, as she is now an MEP and busting EU fraud is a full-time job”.
He added: “She is on the budget control committee here in the European Parliament – and that’s the last place the European institutions want her to be.
“That job was always going to take priority over her being treasurer. As I have learnt myself, I have found being the leader of the group in the Parliament and party leader in the UK and I have found it too much.
“Similarly Marta has a big job here and in the UK and that’s really why she’s gone.”

Well, Mr Farage, that sounds very convincing like everything else you say, but it wasn’t what Marta Andreasen said. 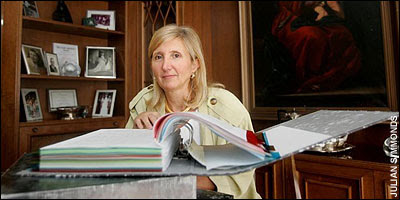 Dare I suggest such a thing but it appears that Nigel Farage is lying, and the version given by Andreasen stands out as the true reason she resigned.

With Farage paddling like mad to cover up the true story of Marta Andreasen’s resignation from UKIP, you start to wonder if there might be a little more to the Farage resignation that has yet spilled out.

Maybe he too has had enough of the internal corruption in the Party and wants to distance himself in time before any story breaks. The media are not far behind and are constantly asking questions relating to his admitted unaccounted for £2 million expenses over ten years. Where were they spent exactly?

If the Chairman is the one implicated in Andreasen’s allegations, why is Farage the one straining to make the cover-up? It’s all very odd, you have to admit.

As so often in the past, one is forced to the conclusion that something stinks at the very top of UKIP, and as the Party grows, it appears the smell is getting stronger. Appointing a known whistle blower to the position of Treasurer might in retrospect be seen to have been a foolish move for an organisation, where the rule book is regarded as something written purely to fool outsiders.

Ms Andreasen told party leaders she was quitting during an executive meeting where she pointed the finger at Paul Nuttall, the party chairman, for pushing through decisions she could not support.

“I resigned because I disagree with how the party is being managed at the level of the chairmanship,” Ms Andreasen told a newspaper.

“There have been certain breaches in the procedures that I have implemented; therefore I warned the NEC [National Executive Committee] this is not the way I want to handle the finances of the party.

“I do not want to see funds being wasted, and the management of this party needs to wake up,” she added.

Ms Andreasen’s resignation from her post — but not from her seat in the European Parliament — has exposed deep internal tensions in UKIP as it starts a leadership campaign to replace Mr Farage. He announced his resignation as party leader during the lacklustre UKIP conference over the past weekend.

Mr Nuttall is seen as a possible replacement for Mr Farage. However, Ms Andreasen said that the last straw came when Mr Nuttall wanted to double the salary of an official without her approval.

The astonishing news that Nigel Farage, UKIP leader, has claimed £2 million in taxpayer funded expenses from the EU Parliament over 10 years dwarfs the misconduct by Westminster MPs.

1. Why does UKIP refuse to publish its MEPs’ EU expense claims? It is hypocritical that UKIP should condemn the EU for failing to sign off its accounts while refusing to detail its MEPs’ use of taxpayers’ funds.

2. When will Farage publish his expense claims so that voters may learn how he has claimed £2,000,000 in 10 years? What is he hiding? Even Tory MEPs now publish their EU expense accounts.

3. What happened to UKIP supporters’ donations? Between 2003-5, nearly 90% of donations into UKIP’s Ashford Call Centre disappeared in administration costs. Another £200,000+ disappeared in Farage’s SE Region in ‘other costs’ (see Electoral Commission website). Demands for audits have been rejected by Farage. Why? What is being hidden?

4. On 27.1.05, why did UKIP MEPs vote to support a motion whose subtext called for ‘closer political, economic and social integration’ with the EU, for brainwashing in schools and for the outlawing of ‘xenophobia’, a thought-crime defined by the EU as merely an aversion to the Euro? UKIP MEPs, who breached their own party constitution, neither apologised nor renounced this treachery.

5. Why, in early 2007, did UKIP MEP Derek Clark sign an agreement in Bucharest endorsing subsidiarity and the Common Agricultural Policy? Roger Knapman, ex UKIP leader, refused to accept such a “. . .major departure from what we believed to be UKIP’s policy – withdrawal from the EU, a complete rejection of its authority and of the CAP. Subsidiarity is an EU doctrine which assumes EU sovereignty. . . Accepting subsidiarity accepts ultimate EU sovereignty.”

6. Why does the foreign Marta Andreasen (Farage’s number two in the SE) merely desire reform of the EU and not withdrawal?

This is what senior UKIP officials have stated of Farage and UKIP:

Craig Mackinlay, ex Vice Chairman UKIP, on internal UKIP elections: “I will not be associated professionally or personally with what has become a perverted and shambolic process. Threats from the Party Chairman . . . merely add to the stink that now surrounds this election.”

(Tapestry – I’ve heard these allegations elsewhere from sources who would know, and I believe all UKIP internal elections are rigged)

Richard North, ex UKIP Chief Researcher, writing of Farage: “He cannot tolerate anyone in the party who he feels is or might be in a position to challenge him. He prefers to surround himself with incompetents and deadbeats. Anyone who emerges who might show an independent streak, he ruthlessly eliminates, to ensure that they cannot be seen as competition.”

(Tapestry – Richard North might well be right but he was bitter at being blocked from becoming an MEP. He would have been a formidable one – especially campaigning on military affairs. But Richard is a very strong character and he might not be liked in a small tream.)

And again: “(Farage) . . . spends the bulk of his time manoeuvring and scheming to keep himself in the dominant position, while presenting to the world his “boyish charm.”

(Tapestry – I would agree with this statement, but NF is capable of great charm, and is an overall strenth to the eurosceptic movement. I don’t see him as the primary source of UKIP’s appalling structure, but people he cannot get rid of even if he wanted to)

(Tapestry – a politician lying ? Well yes. Nigel Farage is one of the best )

(Tapestry – it’s more complicated than that)

David Abbott, ex NEC member and committed Christian: “Our leader issues an edict that MEP’s wives must not be on the MEP’s payroll. Then he is caught paying his own wife.”
And again: “These new revelations were on top of all his (ie Farage) more obvious defects including total amorality, bullying, adultery, and drunkenness, vengefulness and lying.”

(Tapestry – who cares what he drinks and what he shags. But lying about expenses is clearly not a good idea these days !!!)

Roger Knapman, ex Party Leader and MEP: “UKIP MEP’s met and agreed a statement of practice – first that we would not go on ‘junkets’ to other countries and secondly that we would not employ our wives. This was to prevent us getting dragged into the comfortable EU world that leads to ‘going native’. I am now very worried that this agreement is being ignored and that the attractions of the European Parliament as a career may beckon to some; where the delights of plush new office suites, Brussels titles and internal parliament or IndDem Group politics are more attractive than our original purpose.”

(Tapestry – Roger should know, but then he was only kept on as leader to provide a respectable front for the rogues who really run the party like Natrass and Farage, whose regions are their fiefdoms)

Robin Page: “The party created to fight centralised government, sleaze and corruption has become a mirror image of the body it professes to loathe.” (Tapestry – correct) 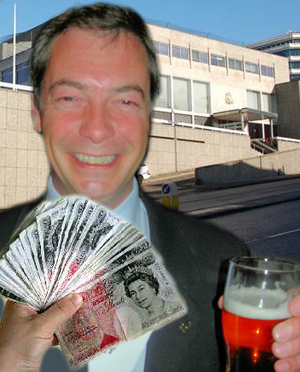