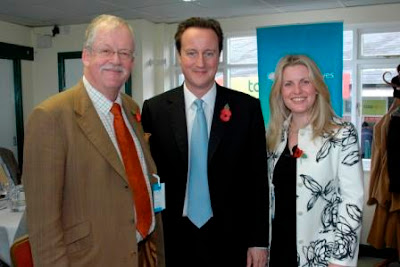 The following exchange involving Roger Helmer MEP appeared on the blog, Conservative Home today HERE, Sunday September 6th 2009, at 8.28 am. If what Roger Helmer said proves correct, it represents a sensational development of the Conservative Party’s official position as regards the Lisbon Treaty.

Strangely no one has yet realised how big a change is being signalled – either that, or no one believes it to be true. It would indeed be nice for Roger to confirm or explain again what he said. The fact that he hasn’t added or subtracted to his words, made on a live thread, indicates that they should be taken seriously.

I should add that Roger Helmer is one of two Conservative MEPs representing The East Midlands (both pictured next to David Cameron, Party leader). He always chooses his words carefully, and is not known for making wild statements, or saying things not approved of by the Party leadership.

I believe we will do what William Hague and Mark Francois say we will do — take decisive action to ensure that we are not part of the new Lisbon Treaty arrangements. I don’t believe that the Party membership would stand for anything less.

‘we will… take decisive action to ensure that we are not part of the new Lisbon Treaty arrangements.

The promise is strengthening from the earlier version, which was only ‘we would not let matters rest there’..

It leaves open the possibility of promising a referendum, but is actually stronger than that. It states, in effect, that the Conservatives will renege on Lisbon, referendum or not.

If Roger Helmer is correct, this is sensational.

The policy change it signifies, which is of worldwide importance, was revealed on a blog !!!

With Farage standing in Buckingham against Bercow, and 500 UKIP candidates standing in the General Election, Cameron must be aware that his biggest danger is no longer from Brown and the Labour Party who are totally discredited, but from losing votes to UKIP.

It would not be surprising to see a shift in Cameron’s position on Lisbon, given the growing threat to his vote over Europe. Helmer has possibly anticipated the release of a new approach here. Watch out for confirmation of this in the days ahead. 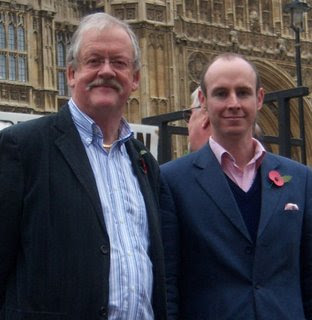 The effects on our EU partners comes second, as the election approaches.

Winning power is the only game in town.

Electoral arithmetic shows that even with sizeable poll leads, Cameron’s support is concentrated in the South, and he should only expect a majority of around 60.

We know that in 2005 a UKIP vote of around 2% lopped off somewhere around 20 Conservative seats…give or take. Some say 30, but 20 is very likely.

If UKIP’s support is now at around 5%(YouGov) and it is still coming mostly from the Conservative side, it would only take a small Farage-inspired surge to remove Cameron’s majority entirely.

The BBC will be featuring UKIP all the way to polling day, you can rest assured, using them to protect their sponsors.

In these circumstances the likelihood is that we will be seeing a rapid strengthening of Cameron/Hague’s Lisbon promises.

Helmer has just given us a signal that this is happening, or is being discussed, at least, or about to happen.

If Cameron doesn’t beef up his euro-position, his well-crafted leadership could soon be in serious trouble.

He came in to oppose Blair, and did a great job. Then he adapted his act to face down Gordon Brown, and again succeeded.

But he will now need to change emphasis a third time, to face down Farage.

The orientation of other EU countries to Lisbon is a factor. The signs are that Lisbon might well be in trouble in Ireland, in Germany, Czech Republic and Poland.

Cameron would feel a lot safer beefing up his Lisbon position if the second Irish referendum was already in the bag, or if the German elections were over, showing a swing away from Merkel. But the threat to Cameron from not acting is already in the market in the UK, and he won’t have the luxury of waiting to see.

If he goes ahead and beefs up his Lisbon promise level to head off Farage, and then the Irish 2nd referendum goes YES, and Merkel is re-elected, he would be stranded – vulnerable for having gone ahead too quickly.

He has to make a very finely balanced judgement.

If on the other hand, he doesn’t act quickly enough, Cameron’s electoral position could become desperate, and he could soon be facing the same fears that Hague faced in 2001, when Conservative canvas returns showed 20% of Conservatives were considering voting UKIP. 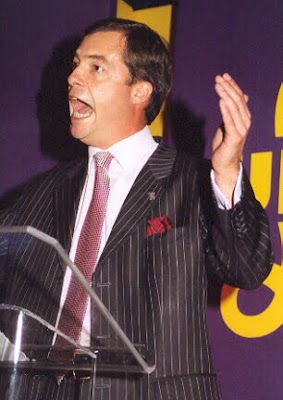 In 2001 the line held, and Hague’s fears of a eurosceptic revolt were not realised. But this time, the revolt is far more likely. Cameron’s skills as a middle ground politician make him not so credible as a eurosceptic.

He needs to boost that credibility urgently.

Maybe that’s why the change is being filtered out quietly in a blog. Later it will feature in Party conference speeches.

LOWER PICTURE – The problem. UKIP’s Nigel Farage’s skills as a speaker and communicator. He tells Conservatives what they want to hear, but if he succeeds in winning Conservative votes, he could well enable the Lisbon Treaty to survive in the UK, by stalling Cameron.

Cameron now has no choice but to become explicit in his Lisbon promises. ‘We will not let the matter rest’ must become exactly as spoken by Roger Helmer – ‘we will take decisive action’, and then tell people what those actions will be.

UPDATE – Sunday Express says that 67% of Britons want a referendum on EU membership, including more than half of all Labour and Lib Dem supporters, plus 82% of Conservatives. See HERE. In these circumstances, Roger Helmer no doubt sees the change coming in Conservative policy as inevitable.