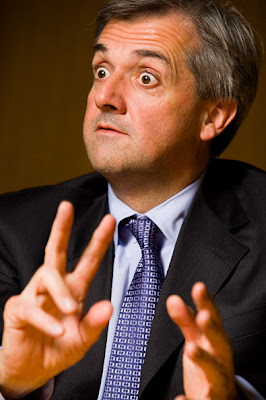 Just as the polls in Ireland at last provide evidence that the NO side will win the Referendum in Ireland, and as it becomes clear that Vaclav Klaus in the Czech Republic will not be signing the Lisbon Treaty any time soon , the rhetoric from the EUtopians gets ever more desperate.

If Ireland is saying NO, and Klaus successfully blocks Lisbon, it is almost certain that David Cameron will be able to carry out his promise to hold a Referendum on The Lisbon Treaty in Britain. Lisbon, in truth the EU Constitution, after so many years of preparation is destined to crash.

The bitterness of the EUtopians is spilling out, confirming through their words and actions, the deathly prognosis for the EU’s shiny ‘new’ Constitution, no doctor able to revive her. The dream was never meant to end like this !

The official sulking in Sweden, the shifty manoeuvring of journalists in London is now matched by the most ludicrous tactic of all – Liberal Democrat politicians accusing David Cameron and William Hague of grievous imaginary social crimes.

They have as yet done nothing as regards Lisbon, except state that if the Treaty fails to be ratified, they will be offering Britons a choice through a Referendum as to their preferences for Britain’s future relationship with the EU.

They withdrew the Conservatives from the EPP in the European Parliament, and set up the ECR – European Conservative & Reformist Group, dedicated to ending the federalist programme.

But that was all very recent.

The failure of the Treaty cannot be easily laid at their door.

They are only trying to start the process of working out what will come next, once the Treaty has failed, which now seems inevitable.

Chris Huhne, the party’s Home Affairs spokesman, is to make a speech later in which he will claim that “a vote for the Tories is a vote for more crime”, according to the Daily Mirror.

But that’s not the half of it. Michael Crick reported on last night’s Newsnight that Huhne will go on to make a highly personal attack on William Hague in relation to the new European Conservatives and Reformists grouping in the European Parliament.

Crick said (17 minutes and 30 seconds into last night’s programme) that Huhne will describe William Hague as “a skinhead who has gone round the beer cellars of Europe and come up with the dregs”.

That’s the language of a loser, and a bitter loser, if you will pardon the pun !

Taking all of the signs coming from EUtopians in all countries, there must be little doubt now that the EU Constitution with all its pomp, circumstance and sheer arrogance is now possessed of terminal illness. You only have to hear them talking to see their desperation.

Maybe Hague should send flowers and donations to a suitable charity. I doubt he’ll be invited to attend the funeral. 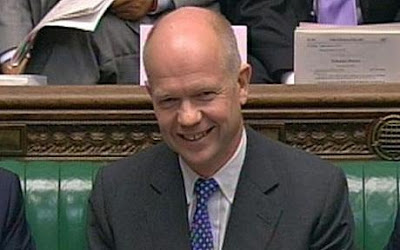 PICTURED – The object of Chris Huhne and the EUtopians’ venom, William ‘skinhead’ Hague in the House Of Commons. At top Mr Bitter himself, Chris Huhne, Lib Dem MEP earning Brownie points in Brussels, but not making a blind bit of difference to anything else.

2 Responses to “More Evidence Of EUtopian Bitterness And Desperation”