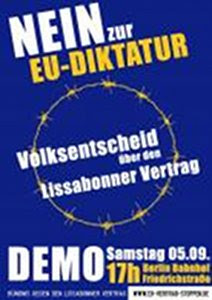 Wow! This is serious stuff. The German Youth Movement is holding a demonstration in Berlin against the EU Dictatorship, and the Lisbon Treaty. In the UK calling the EU a bunch of dictators and little Hitlers is commonplace. But in Germany?!! This would never have been seen a year ago pre the recent decision of the Constitutional Court.