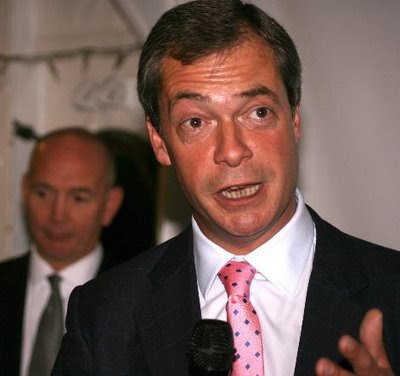 Reading today of Nigel Farage’s resignation as the leader of the UKIP, and watching TV reports of the Southport conference, gave the impression of a Party running out of momentum. So it was cheering to read that the old Nigel Farage, the hard-hitting activist of yore, is still throwing punches at his old adversary, the EU – but this time over the Irish Sea – in Ireland.

From The Irish Times – THE UK Independence Party (UKIP) will send a leaflet to every Irish home urging a No vote in the Lisbon Treaty to close an “open door” to immigrants.

It will also argue that the final decision on sensitive ethical issues such as abortion and euthanasia will pass from Irish to European courts if the treaty is ratified.

British MEP and UKIP leader Nigel Farage said: “With the Charter of Fundamental Rights, which is justiciable at the European Court of Justice in Luxembourg, it will no longer be your Supreme Court that takes decisions on really hot and contentious issues.” He added the European court had a record of “political activism”.

Mr Farage, who is a trenchant critic of the EU, described the Government’s guarantees on the treaty as “laughable”.

He said UKIP had decided to get involved in the Lisbon referendum campaign because the “No side seemed to be a bit thin on the ground, and someone needed to redress the balance”.

Farage obviously felt frustrated trying to run the Party machine at UKIP, if machine is the word for the shambles that the Party has become, but it is nice to hear that he is still capable of pushing a case and fighting a hard campaign. Respect.

UPDATE ON IRELAND FROM OPEN EUROPE –

Writing in the paper, Stephen Collins argues “The drop of eight points since the last poll, before campaigning has begun in earnest, is eerily reminiscent of the trend before the loss of the first Lisbon referendum and the first referendum on the Nice Treaty, which was also lost.”

An article in the FT by Quentin Peel notes that that the Yes side “look worthy and defensive. They struggle to persuade voters that the Lisbon treaty is both positive and necessary.”

The Irish Mail reports that Enda Kenny, leader of the main opposition party Fine Gael, launched his party’s Yes campaign yesterday claiming that the Lisbon Treaty would boost Ireland’s ability to block new EU laws that would hurt Irish business and industry. In fact, according to academics at the London School of Economics, Ireland will lose 40 percent of its power to block legislation it disagrees with. The Irish Times reports that Fine Gael will spend over €300,000 on the campaign.

The Irish Mail also notes that Irish High Court judge Mr Justice Frank Clarke, Chairman of the Referendum Commission, the independent body set up to explain the Lisbon Treaty, has confirmed the public is being asked to vote on exactly the same Treaty they rejected last year. He added that the ‘assurances’ granted by EU leaders last December to address Irish concerns were irrelevant to the vote, as the issues concerned – abortion, tax and defence – had never been part of the Treaty.

On her Mail blog, Mary Ellen Synon notes that when asked how Lisbon would affect employment policy in Ireland, Irish PM Brian Cowen “could only give a rambling reply that never answered the question.” He said, “Clearly, the way it’s going to affect employment in Ireland is that by having a Lisbon Treaty passed we’ll have more effective decision making in all aspects of both Council, Parliament and Commission in terms of their right of initiative.”

Synon notes that the Treaty says, “The Union shall take measures to ensure co-ordination of the employment policies of the Member States, in particular by defining guidelines for these policies,” effectively reducing the Irish government’s influence over domestic employment policies.

The Irish Independent notes that Ireland’s largest trade union, Siptu, has announced that it is in favour of the Lisbon Treaty. Meanwhile, the Peace and Neutrality Alliance has said that it aims to “expose the Irish Government lie that legally binding EU guarantees on the Lisbon Treaty will not affect Ireland’s traditional policy of military neutrality.”