He sings unequivocably ‘ We’re voting NO’.

Lyrics such as We voted No to it, but this treaty keeps coming back are accompanied right through with original ‘Return To Sender’ soundtrack, Elvis hip rotation and four part harmonies, while a slightly nervous-looking placard-carrying quadret looks on. This is not karaoke, but as good an Elvis tribute as you will ever hear.

(Mark Leen is well known in Las Vegas where he performs as The Emerald Elvis, as well as around the clubs at home)

Taking the COIR Campaign smouldering poster (below) and Emerald Elvis’ hip-rolling dance number, what’s interesting, to the politically-minded, is the lack of speech or text, in either message. Just singing and graphics alone are enough to convey the NO message.

The airwaves have been bought by the corrupt and the powerful, and the younger, sexier, more talented displaced NO campaigners now speak with other voices.

It’s the age-old way for suppressed political movements to go – to express rebellion, youth, hope and identity in other ways. By banning the NO campaign from the media, the YES side have, in effect, tried to make NO illegal, which has the effect of making NO the sexiest possible thing to say, do, draw, sing or wear…silently, powerfully ignoring the ugly and corrupt media bullies that try to control every thought in Irish minds.

It’s like the NO are saying ‘we don’t even need to speak to you, but we easily recognise each other, our ageless and timeless Celtic identity. We know the score, musical, political, and we’re going to sing our tune, not yours.

The corrupt and powerful think they’ve got us, but they ain’t. We’re the Irish, for God’s sake – WINK !’

Was a cry for freedom ever sexier or more charming ? Not that I’ve ever seen. 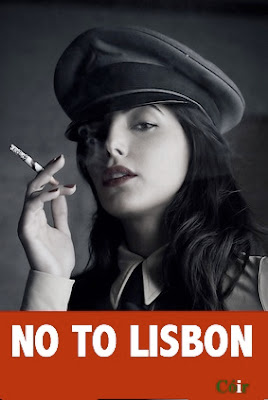