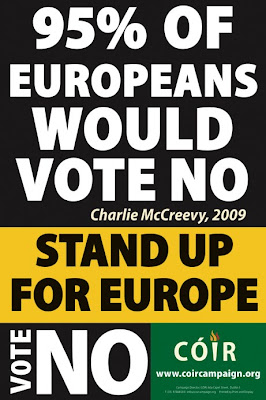 The anti-Lisbon campaign being run by COIR in Dublin is staggeringly powerful. It is way ahead of the lightweight Ganley campaign of last year. The posters and leaflets are devastating. The numbers being distributed are impressive, and the effect will be to crush the YES vote, which has very few arguments.

THIS must be the most devastating and powerful political leaflet of all time, titled LISBON WILL HURT YOU.

The featured poster is only one of ten in the full set which can be accessed on the COIR website. See this and realise that Lisbon will be going down.

David Cameron can relax, and plan his moves against the Treaty in the UK now. With campaigning of this standard effectively deployed by an army of thousands of volunteers, the Lisbon Treaty in Ireland hasn’t got a prayer. Cameron and Hague should get ready to move to a British referendum, and crush the Treaty finally in Britain next year.

“In the beginning, the YES campaign treated Cóir as an irritating little upstart… though they have become rapidly disabused of that notion over the last week.”