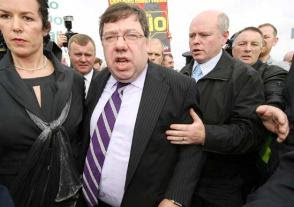 The two Irish referendum campaigns are assuming different characteristics. The YES campaign is focused entirely on economics – with its ‘Yes To Lisbon, Yes To Jobs’ appeal to the pocket. The NO campaign is far less rational, but no less powerful for that. If the primary emotion in the first Lisbon Referendum NO campaign was confusion, and its attendant fear, this time anger is the force driving the NO campaign onwards to victory.

Take this news story from yesterday. ‘Taoiseach forced to take cover in tent as protest turns ugly’ An anti-Lisbon protest at the Ploughing Championships turned nasty yesterday as protesters attempted to push their way towards Taoiseach Brian Cowen.

It was only a few days ago that the Gael Poll reported that the two sides were dividing between those who would vote YES saying they were basing their decision primarily on jobs, and the NO voters who were angry at loss of freedoms. 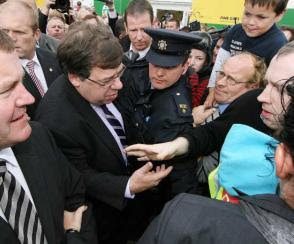 Yesterday with the vote only a week away, the Taoiseach finds that he can no longer walk freely amongst his own people. He looks shocked.

The EU has always asked its citizens to vote away their freedoms for supposed economic advantages. Now it seems that the certainty of the loss of freedom is scoring harder with people than their belief in any more economic promises, which have, in any case, been seriously undermined by the credit crisis.

See the details of the Gael Poll report, as from www.libertas.eu

One interesting insight that the pollsters gleaned were the variety of ‘off the radar’ reasons why people intend to vote No:

“Frankly a lot of the personalities who are fronting the Yes campaign don’t appear to be very popular and a lot of people have commented upon this.”

“Apart from the obvious well known issues, we found that people were very concerned about the curtailment of alternative medicines and the banning of turf cutting to the over-preponderance of EU flags and emblems. If you were to boil it down to core emotions, No voters tend to be enraged and up for a fight whereas Yes voters tend to be motivated by economic fears,” explained Paul Murphy.

“The anger at the handling of the economic crisis is overcoming the fear kindled by the Yes campaign in relation to the downturn,” said spokesman Richard Greene.

He added that supporters of the Treaty had “overplayed the fear card” saying that “all the fear-mongering has worn thin and people are asking real questions at the doors – about jobs, wages, the power of the EU Court and our future in Europe.” Mr Greene noted that last week’s Wall Street Journal had described the government’s pro-Lisbon campaign as “peddling phantom terrors”.

“People have been listening to politicians falsely warning of financial ruin if the treaty wasn’t passed, but now the anger felt by voters at NAMA, at job losses, and at cuts, is allowing voters to overcome that fear,” said the Cóir spokesman. 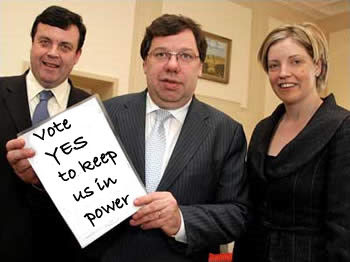 It is growing and unabated anger which is driving the EU’s New Constitution towards defeat in Ireland. The evidence is undeniable. The Taoiseach’s government can only have days left to survive,it appears as he has to be shepherded away from his angry public. If Lisbon is defeated a second time, as seems likelier by the day, Cowen’s unpopular government will quickly tumble.