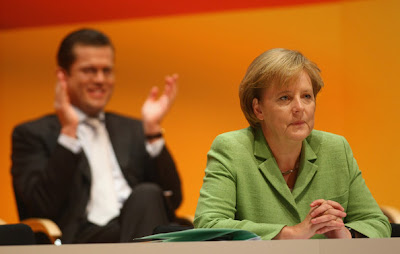 Meanwhile, the SPD is anxiously witnessing the rise of a new conservative star: Karl-Theodor zu Guttenberg, the new and youthful federal minister for economic affairs.

At first, Guttenberg’s lack of experience seemed to offer a perfect target for SPD attacks on the conservative coalition. Indeed, Guttenberg is just 37 years old, an aristocrat and a member of the very conservative Bavarian CSU party.

However, to the SPD’s horror, Guttenberg became the most popular politician in the grand coalition within a few months, even overtaking Chancellor Angela Merkel.

Guttenberg’s bold positions on current issues – the financial crisis, the economic stimulus package and support for the Opel automotive group – won him praise for their straightforwardness, even if that led him to clash with other members of the government.

Since then, many political observers have been admiring his self-assuredness.

Far from offering them ammunition, the Guttenberg factor may thus represent a further disruption to the SPD’s campaign strategy. Steinmeier had to immediately stop his aggressive political attacks on the young man.

Steinmeier wanted to open his electoral campaign ahead of time, so as to take Merkel’s party by surprise. But it was he who had been taken by surprise by recent developments, analysts said.

Furthermore the CSU’s new star is the nephew of MEP Stauffenberg.

The German revolt against the Lisbon Treaty goes deep into the political establishement, with Mr Stauffenberg also being the uncle of Karl-Theodor zu Guttenberg, Federal Minister for Economics and Technology in the cabinet of Angela Merkel.

A vote in the German parliament is scheduled for 8 September.